Family Drama: Your House Has a Role, So Give It a Name!

One of my earliest literary epiphanies came when I was 8 years old. I had read stories about precocious kids getting into scrapes before, but I had never heard of anyone who lived in a house with a name. Then I read Anne of Green Gables.

When the House Becomes a Main Character in Fiction

And really, it completely made sense to me that the house had a name. Green Gables was omnipresent in Anne’s life — her first home, her sense of security after so much instability as an orphan, and the embodiment of the love she found there. It became as much her protector as Matthew and Marilla did and more, a fourth family member by far the oldest and wisest, the one who had witnessed the most joy and sadness in its lifetime who, with each of Anne’s heartbreaks and disasters, took her under its eaves and whispered, “This, too, will pass.”

As I grew, I developed into a regular book worm. My favorites were from classic British and American literature, mostly from the 19th century but some pre-WWII as well. It’s funny how many of these novels had their settings serve as ever-present and influential protagonists.

Luckily, since many of the best books in the English language have been made into movies, I can present these houses to you here, courtesy of Hollywood and its British counterparts:

Mr. Darcy’s Pemberly signified all things good, well-ordered, and beautiful in Pride and Prejudice compared to the noise and financial insecurity of Elizabeth’s home, Longbourn.

In Jane Eyre, Thornfield was ancient, wild, and mysterious, hiding a dreadful secret, much like its master, Mr. Rochester. (Sidenote: Who else has noticed that Haddon Hall was also Prince Humperdinck’s castle in The Princess Bride?)

Those Bronte sisters were really quite morbid. I love them. More dark, windy houses harboring long, festering hatreds and unknown secrets in Wuthering Heights. Have you ever seen a more forbidding abode?

Finally, some flowers and sunshine, with happy endings and new beginnings again. Like Green Gables, Orchard House is the home to another wholesome girls-coming-of-age-without-getting-into-sex-and-drugs-and-despair novel, Little Women. Every mother hopes her children remember their childhood homes to be like this one.

Scarlett O’Hara loved only one thing in the world better than herself —  Tara — and there was no unscrupulous or self-sacrificing act she wouldn’t commit to save it. Tara is her refuge, her purpose for surviving, and strength for prevailing. For better or ill, the pre-Civil War South is the only place that our country ever really had a landed gentry with all its estate-like beauty, manners, and pageantry like there existed prior to WWI in Great Britain. One can’t help but be fascinated.

More ghosts, sinister characters, secrets, and tortured souls — male, female, and architectural. Daphne du Maurier is one of my all-time favorite suspense writers, and Rebecca is her best. I love the Hitchcock film, too, in all its melodramatic glory. I mean, really, how many times can Lawrence Olivier put his hand to his brow in anxiety and despair? Or Joan Fontaine look to the side in stunned agony? But I probably love it all the more for it.

No easy way out of this family domicile’s influence in Evelyn Waugh’s Brideshead Revisted; this home looks as inexorable as God, Himself, and intentionally so. The main character, Charles Ryder, is as much seduced by the house as by its aristocratic and morally complex Flyte family — and in the end, an even more undeniable character. No wonder Hollywood waited until 1981 to attempt an adaptation.

It has long been custom in England and other parts of the world to name their castles, manors, even small cottages. Sometimes these were named after the town where they were built. The home might be named after the owner or their ancestors. They could also be named for a notable feature of the area, such as “Meadow View” for a home surrounded by wide, open fields, or “Sunnydale” for a home in a bright little valley. With the 19th century and the rise of the Victorian middle class, more homeowners named their houses in villages in towns as well. The practice was also quite helpful to the postal service before the advent of street numbers!

Now that we have a standardized numbering system, naming homes seems to be reserved these days for vacation rentals, millionaires’ estates, and second homes in the country, often to increase their prestige or character as a getaway (see this article from the Wall Street Journal).

Our poor primary residences — the places where our kids get sick and we grieve over failures and lost loves, where we celebrate promotions and college acceptances and won soccer games — get short shrift! Could you imagine just calling your kid, “The Kid,” or your mother-in-law, “That Woman in the In-Law Suite?” People are used to naming their condos in Florida, but how much more of a role to our homes play in our family life?

I mentioned in my post last week that we have given our house a name, too — Maple Rest. Our home was actually called “The Willows” during the 19th century. I would have loved to have kept that name, but there is only one scraggly willow left. It would have seemed a little tragic.

Here is our home during its time as The Willows when it was the residence of Herman Greene, a seaman and merchant.

Nice Victorian porch! See the maple right by the front door? Now, our house as it is today: 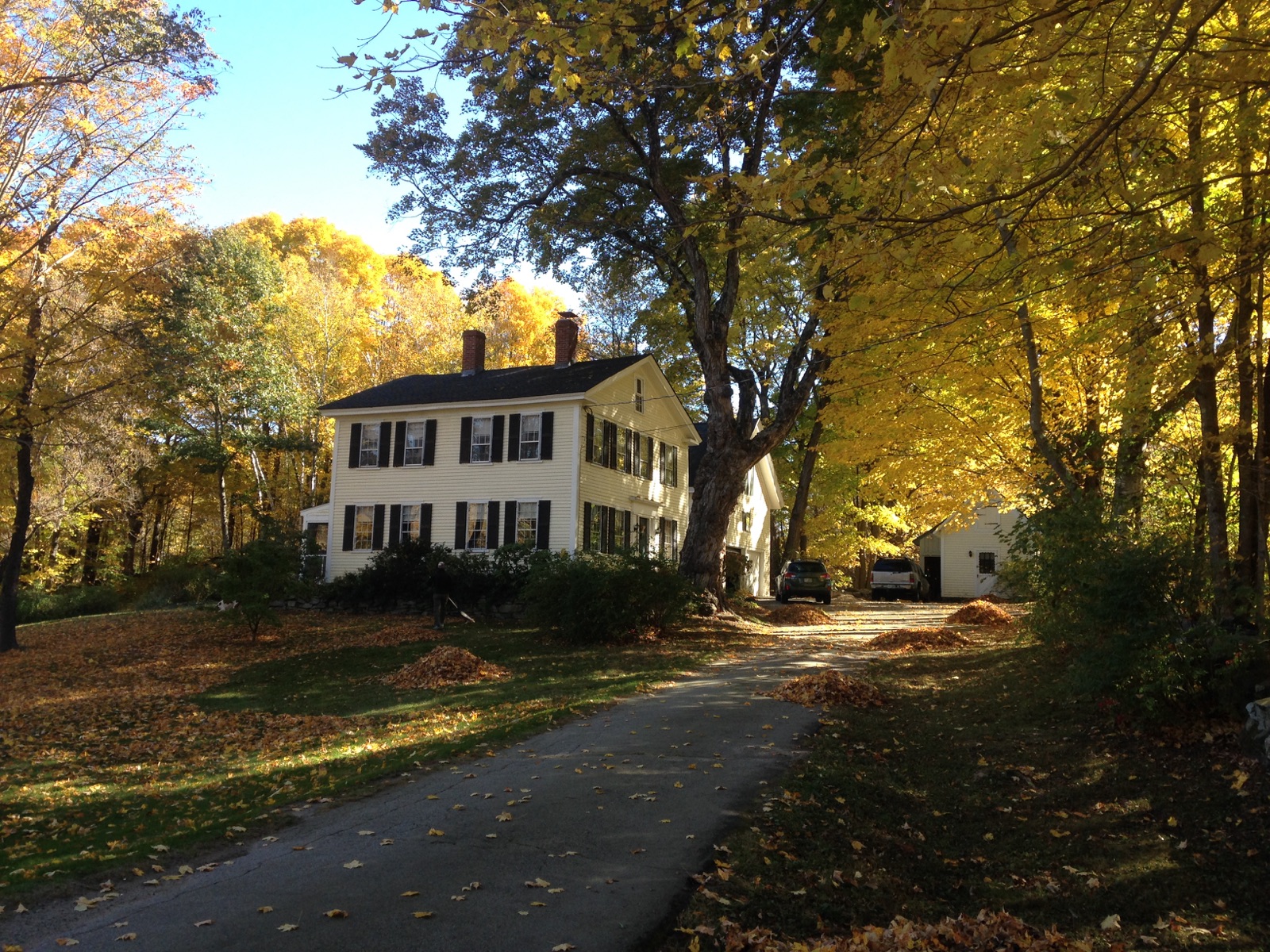 That maple tree is enormous now, and there is a healthy stand of more maples along the drive and the pond. As we wanted our home to convey a sense of warmth and refuge from the bustle of outside life, as well as a haven for guests, Maple Rest seemed apt.

I think we need to bring back the practice of naming our homes! In fact, I drove around my town and the next one over to see if there were any Romantic souls who agreed with me. I found, as Anne did, that “Kindred spirits are not so scarce as I used to think. It’s splendid to find out there are so many of them in the world” (Anne of Green Gables, L.M. Montgomery).

I firmly believe that a house doesn’t have to be old to have character. Does your house have a name? If so, please share! I’d love to start a petition to scrap the house number requirement if a suitable name is offered as a replacement, but I think my U.S. Postal Service lady would kill me. And believe me, considering the ease with which you can get a concealed carry permit in New Hampshire, I might not be far off there. 🙂 Just kidding. Live free or die in the Granite State!

Next week, a study in “Which came first — the chicken or the egg?” as we take a look at … ART.

P.S. If you liked this post, please sign up in the left sidebar to receive Home Glow’s Saturday Blog in your inbox, and you’ll never miss one! And if you REALLY like it, tell your friends! Many thanks!! -A

6 thoughts on “Family Drama: Your House Has a Role, So Give It a Name!”

PrevPreviousHistorically Inspired: Just How Fresh Can an Old House Get?
NextWhat Comes First — the Interior Design or the Art? Design Dilemma.Next