Tom Scheerer has been one of my favorite designers for going on 5 years now. I find his interiors to be so unexpected and improvisational, but grounded in pieces that have classic lines that he uses in new ways. However distinctive his style may be, it is still SO flexible, as his varied projects in the city, country, and tropics attest. Is it modern, is it traditional? Who cares — it’s unique.

And yet, for all his freshness and adaptability, Tom has more “calling cards” — things a designer tends to use again and again — than any other designer I’ve noticed. It’s amazing how they translate from project to project. These, frankly, pretty awesome things include (in no particular order):

Try entering any of the above search terms in Pinterest with Tom’s name and you’ll come up with a host of images.

And while Tom’s canon is so prodigious that it would be impossible to review it all in a single blog post (Even his AMAZING book doesn’t scratch the surface. I’ve had it since it came out in 2013, and I’m still discovering new things!) I thought it would be fun to take a little scavenger hunt through Tom’s work by tracking his penchant for Thonet chairs. No idea what Thonet is? I’ll get to that. Now, are you ready???

For all his fame and beautiful designs, Tom is not a very frequent Instagram poster. He’ll go weeks at a time without a peep, and then, BANG, give you a few images of inspiration, only to disappear again.

However, when this image hinting at the upcoming House Beautiful spread of his new New York apartment hit his IG account earlier this week, I wasn’t the least bit surprised.

Saarinen table alert!! But I was also thrilled to see Tom’s latest choice of Thonet chair — in this case, the B1811. Often attributed to Josef Hoffman, it was more likely designed by Josef Frank and first appeared in the Michael Thonet Bros. catalog in the 1920s. It has a nice masculine quality, doesn’t it?

Let’s back up a bit. Chairs made by steaming and bending wood into various shapes had been around for more than 200 years by the time German cabinet maker Michael Thonet began experimenting with the process in 1830. However, during the following 20 years, Thonet and his sons developed ways and machinery allowing bentwood furniture to be produced in unprecedented quantities. The most popular chair was simply titled “No. 14.” It has since become the quintessential cafe chair and has been in continual production since the factory’s opening. To date, tens of millions of No 14 chairs have been produced.

In addition to experimenting with numerous seating and other furniture forms, Thonet designed various pieces that could be combined to make many different models, a stroke of genius that also added to his factories’ vast output.

Thonet was truly a pioneer both in design and mass production long before the Ford Motor Company was founded — how’s that for using both the left and right brains?!

I have been so long smitten with Tom’s and Thonet’s work, that I honestly can’t date which love affair preceded the other. A few years ago, I was lucky enough to find a pair of Thonet chairs in a local consignment shop for a song. Here is one in my son’s bedroom. 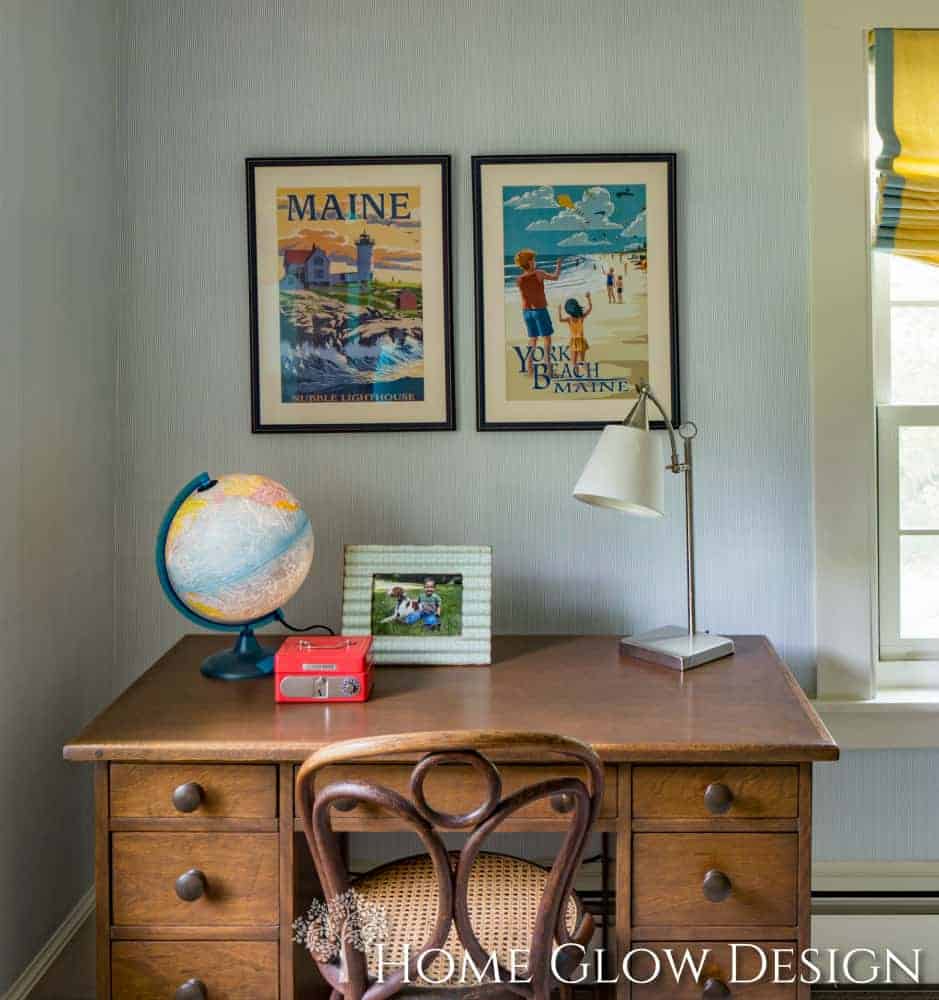 While many designers relegate Thonet chairs as kitchen or dining room seating, Tom tosses them into every room of the house. He can’t seem to get enough of their sinuous, sculptural lines. Let’ s explore, shall we? We may even find a few of Tom’s other calling cards while we’re at it. (Images from www.tomscheerer.com except where noted.) 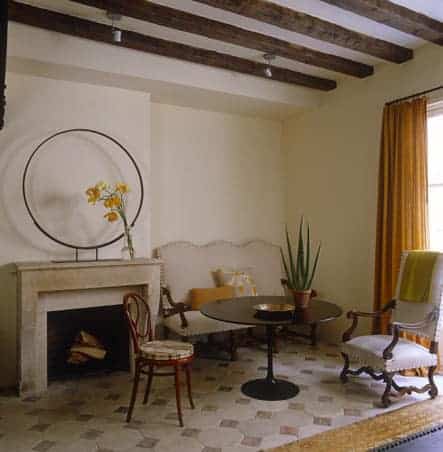 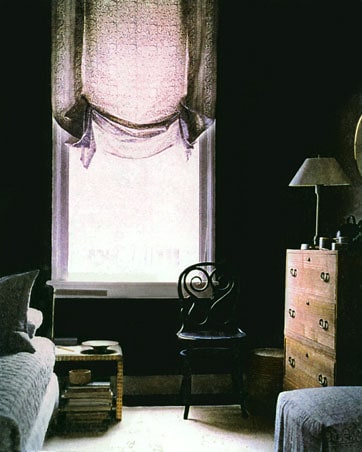 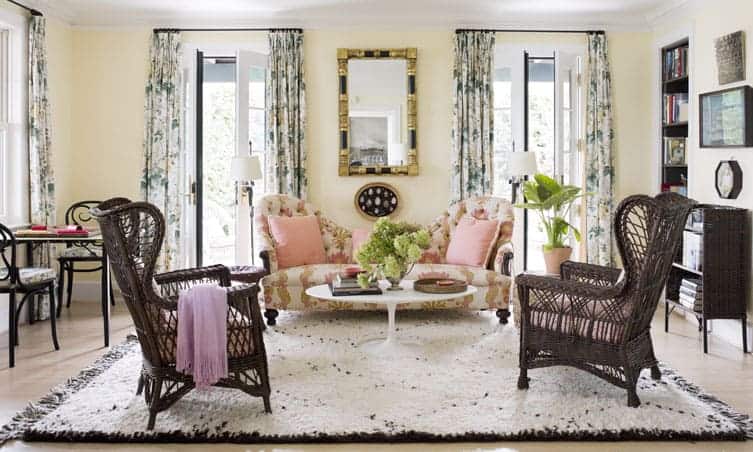 Wicker and a Saarinen table.

Had to show you this gorgeous entry table. These puppies are hard to find. 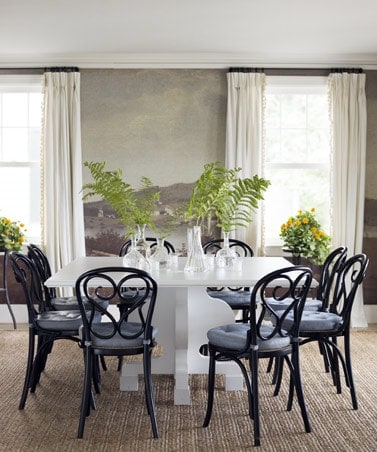 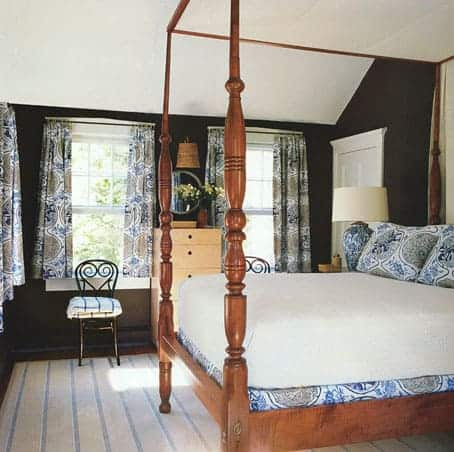 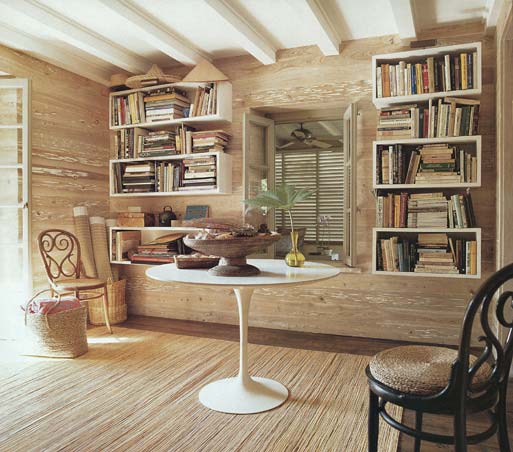 Floating box bookshelves and a Saarinen. 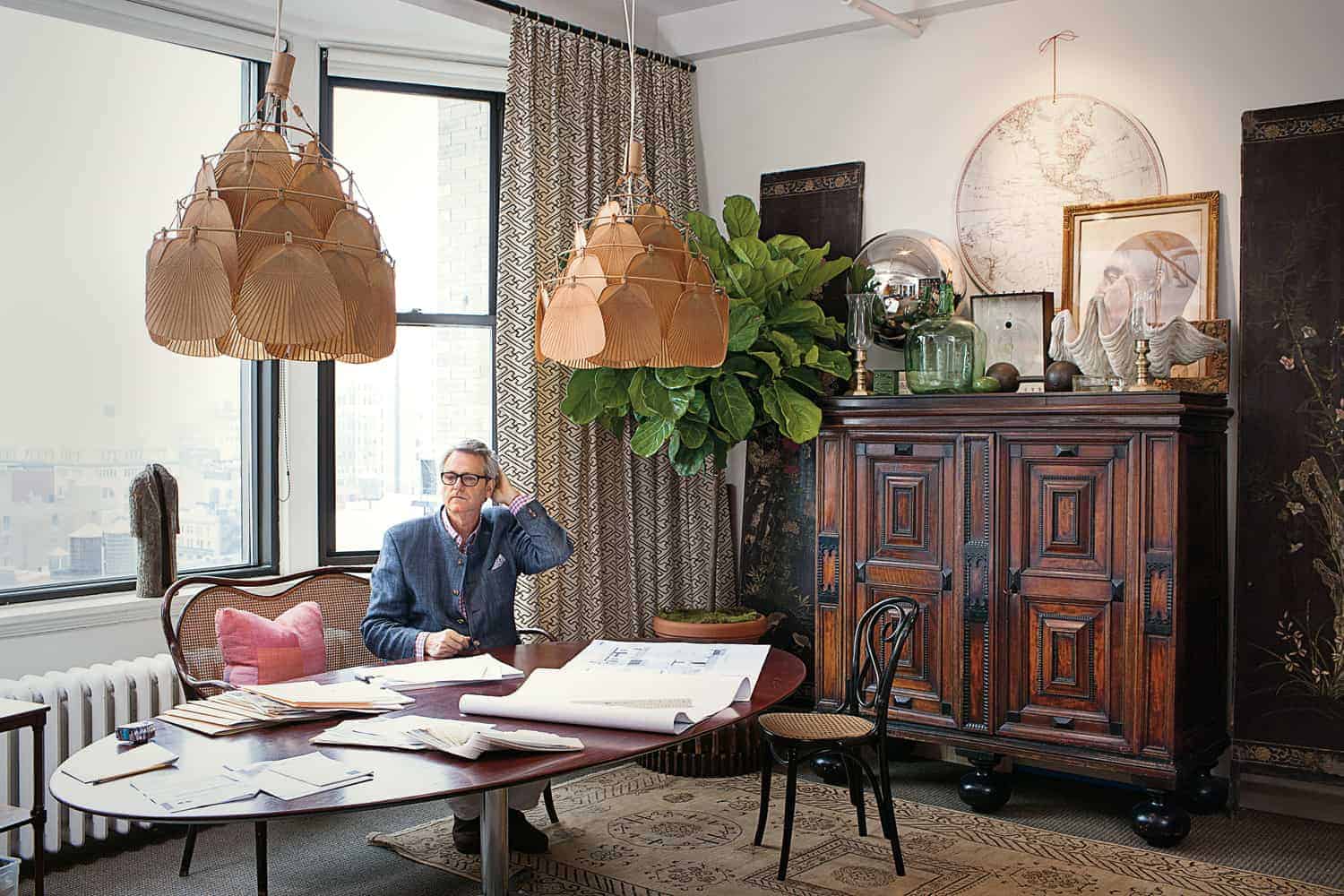 Hey Tom! Why so puzzled? Trying to figure out how to fit more Thonet into your office?

Look! He found another spot for them! 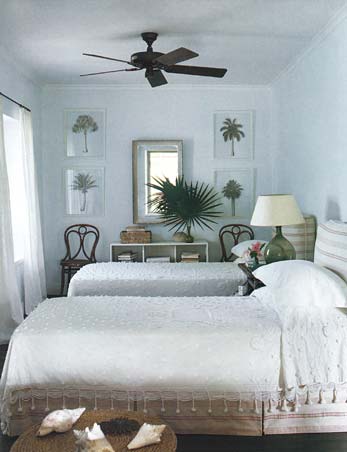 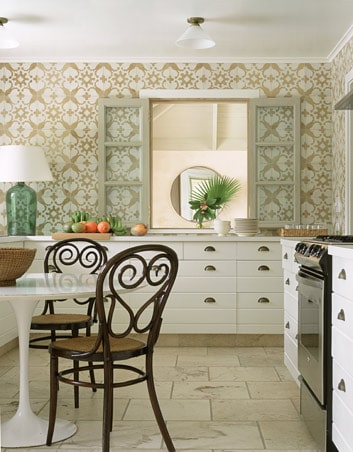 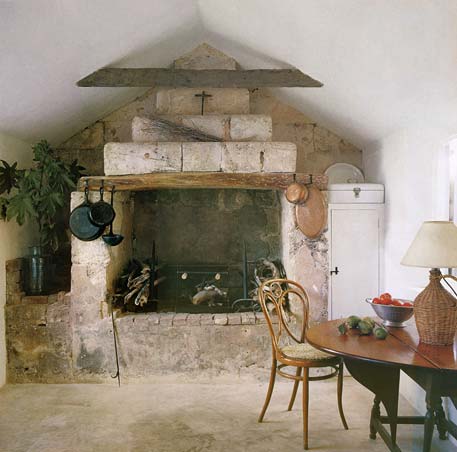 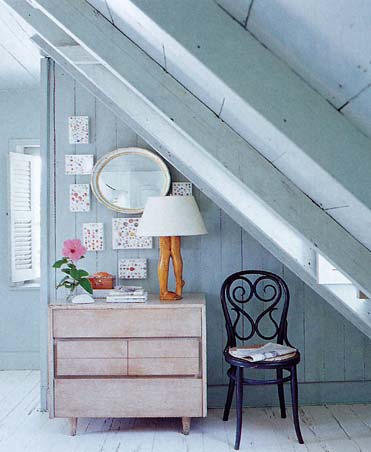 Did you almost miss the funky pair-of-legs lamp? I wonder if Tom likes A Christmas Story….

So do you love Thonet? I just wish I had more room in my house for a whole collection. But there is the problem of where to find them. Serendipity strikes but rarely at the consignment store.

For the real vintage McCoys, you can of course go to places 1stDibs, Chairish, eBay, and Live Auctioneers. Don’t expect to find any deals, though (except at auction). Dealers are on to the Thonet “trend.” Auctions, Craigslist, and the occasional consignment/antiques/junk store are your only good options for scores. Just be aware that having a professional repair loose joints, split wood, and broken caning can add up and make your deal not so amazing after all.

There are plenty of new options out there, including some of the really beautiful old sinuous sexy designs. The more ornate, the more expensive, but here are some finds for you at various prices.

CB only has the No. 18 chair, but I like the pretty Dove color.

Moda the three most basic Thonet styles, but good prices.

Anthropologie has these lovely models, but only in white!! They used to have them in a few colors. Anthro — if you’re out there, please bring them back!!!!

DWR has these two models in a few finishes, as well as a few barstool models.

We’ve hit the jackpot. This is only a screen shot of ONE PAGE of Bauhaus’ Thonet offerings, and there are FIVE in total. Bauhaus has chairs, benches, tables, coat racks, even a bed model, all made in Europe. Prices range from around $200 for sale and clearance models into the thousands. They come in every color of the rainbow. Can someone give me a big ol’ gift certificate to Bauhaus for Christmas? I mean a really big one.

Which model is your favorite? Or, for that matter, which Tom Scheerer calling card is your favorite? (I adore the Rudbeck prints, too, I just couldn’t find a single image of where he used them and Thonet at the same time!)

For the last year, I’ve been so focused on getting Home Glow Design off the ground, I’ve put singing on the back burner. But I’m excited to say that next Saturday I will be performing with the Monadnock Chorus over in Peterborough. If you’re local, come hear one of Rossini’s most transcendent pieces to get you in the mood for Christmas. 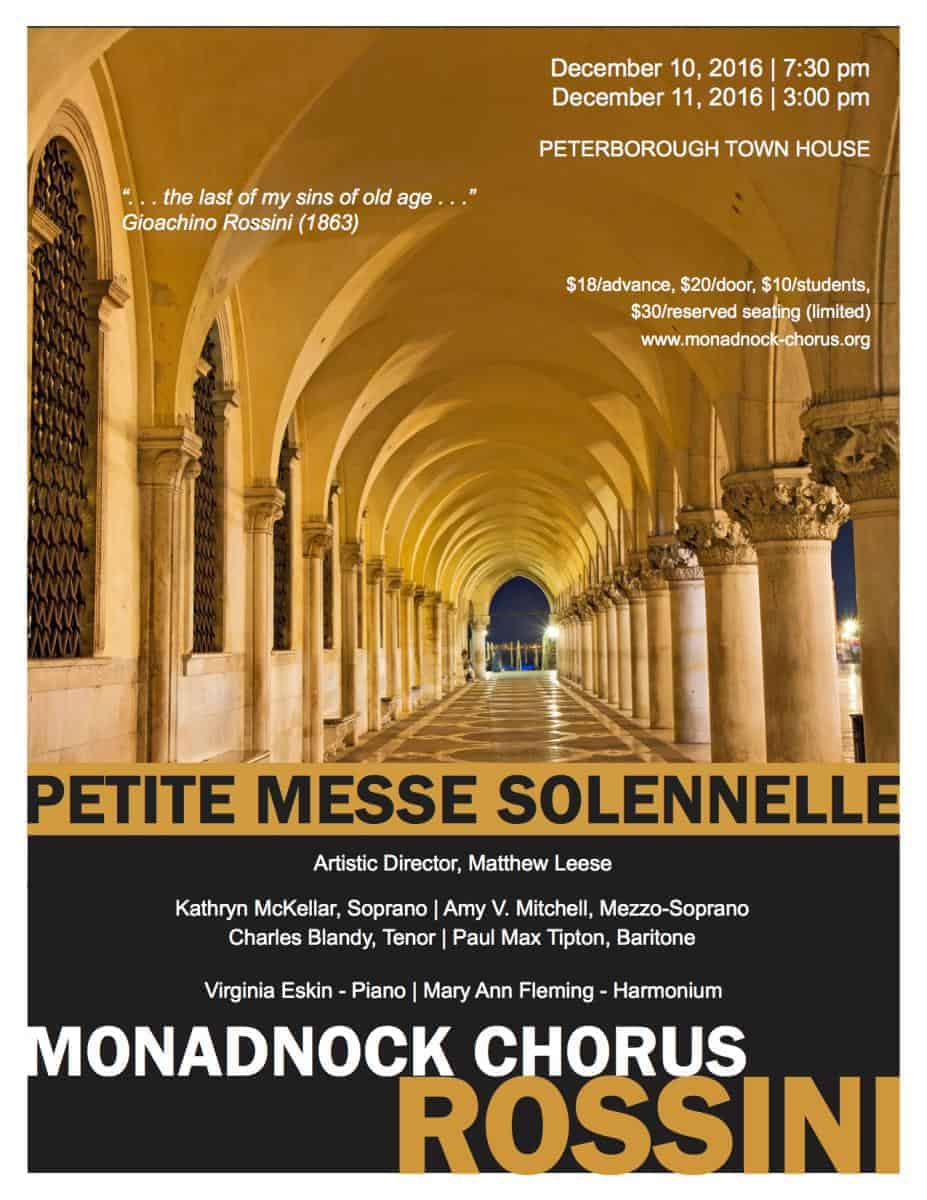 PrevPreviousRange Roundup: When 36″ Packs a Powerful (and Colorful) Punch
NextWhy Your Gray Wall Turned Blue (or Green, or Purple) and How to Fix ItNext