My Review of the AGA Elise Range — One Year Later

This post is a SUPER long time in coming. Part of that delay is because I had grand dreams of making some amazing meal, taking pictures, and having some post that looks like the Barefoot Contessa or Smitten Kitchen or something.

However, I was struck over and over that, while I love to cook a fun meal (and heck, I’m even pretty efficient in having everything warm & ready to serve at the same time!), preparing a *special* meal is rarely a calm undertaking, and certainly not one replete with luxurious amounts of time in which to photograph the fruits of my labors.

I felt like a home & lifestyle blogging failure. So I kept putting it off.

But then I thought — hey! There are THOUSANDS of women out there just like me, who love to cook & cook well, but don’t necessarily have Instagram-worthy meals, even in a whole calendar year. And THEY would benefit from my experience!

So here it is — my review of the AGA Elise after ONE ENTIRE YEAR of cooking with it! Not many pics of food, I’m afraid, but plenty of the stove in my Remodeled Remuddle of an “unfitted” kitchen … which is really why you’re here anyway. 🙂

Why I Chose the AGA Elise for My Unfitted Kitchen 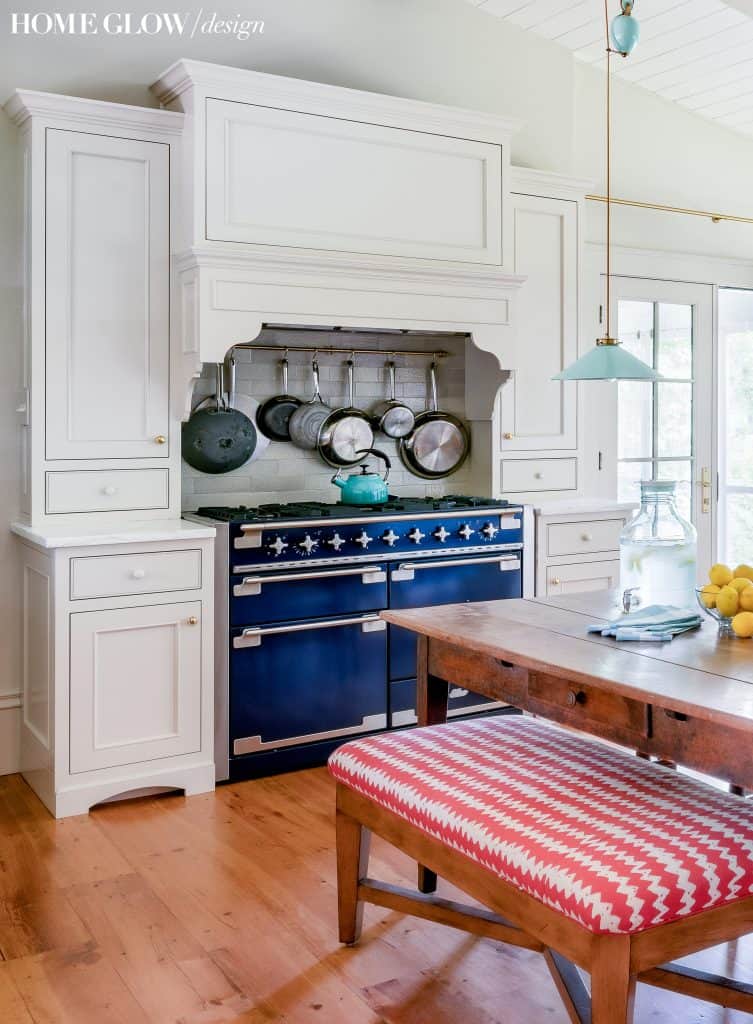 We lived in our 1790 Federal farmhouse in New Hampshire for 8 years, saving for this project in particular for 2 years, before we undertook our Remuddle Remodel in late 2019. I had A LOT of time in which to gather inspiration.

For all the backstory, see the posts located here. with the full reveal of the Unfitted Kitchen/Converted Porch here. You can also read a quick synopsis of the WHOLE project in Old House Journal’s 2020 December Readers’ Favorites Issue!

I LOVE to cook the big holiday meals — hors d’oeuvres, soup, all the sides, the main dish, pies, cake — but prior to the renovation, timing my dishes was always a pain due to the fact that I had only 3 (and then later, only 2) working burners and the one oven.

On a weekly basis, making Saturday brunches was a juggling act, between baking my popovers (Martha Stewart’s recipe is a no-fail — except use 2 tsp of vegetable oil in the cups instead of greasing them individually. It’s like fried dough!) and wanting to roast bacon in the oven (the best way to cook bacon, IMO!), I could never have everything hot at the same time.

I always wanted an “unfitted look” for my kitchen — American overall in style, but with an English bent.

I wanted a range that would be the happy jewell of the heart of our home. 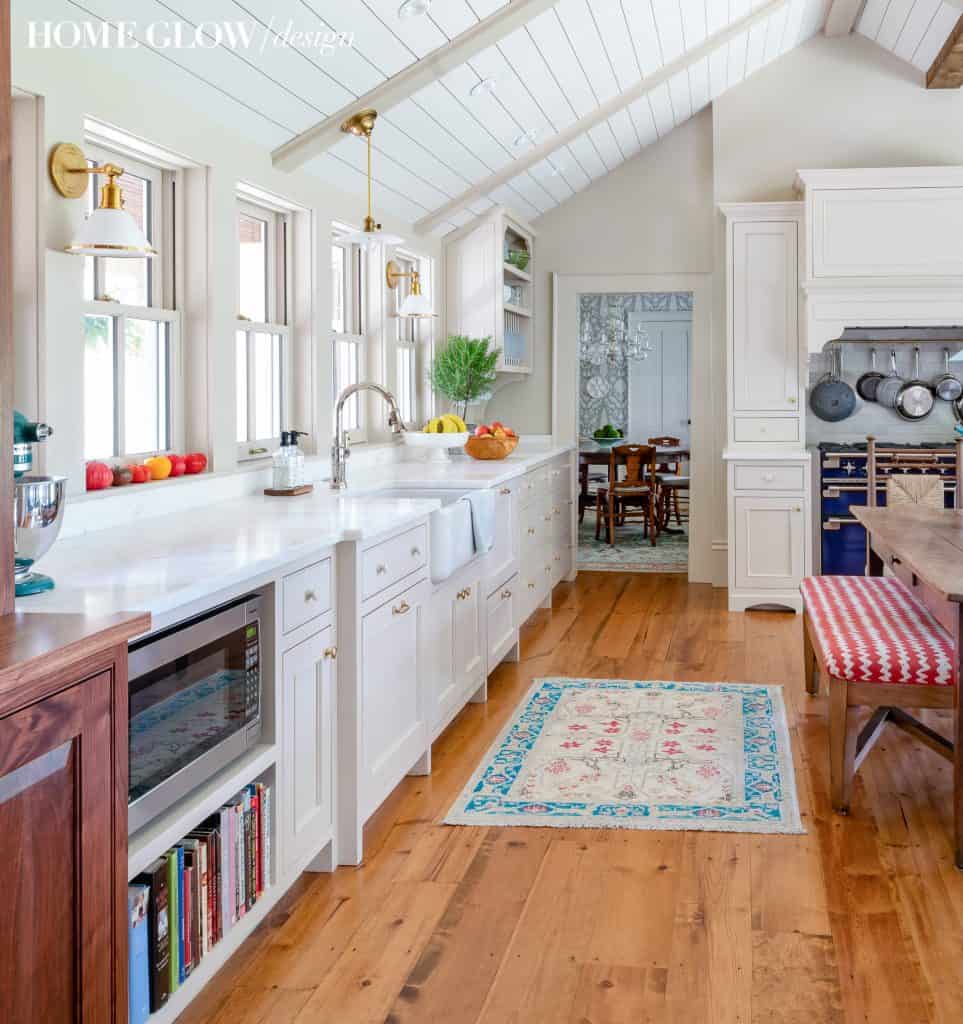 I adored (and still do adore) the Lacanche ranges for their historical, non-blingy, & understated styling. I had hoped and planned to use one, specifically the 40″ Changy, which has 2 ovens, a broiler oven, and 5 burners. 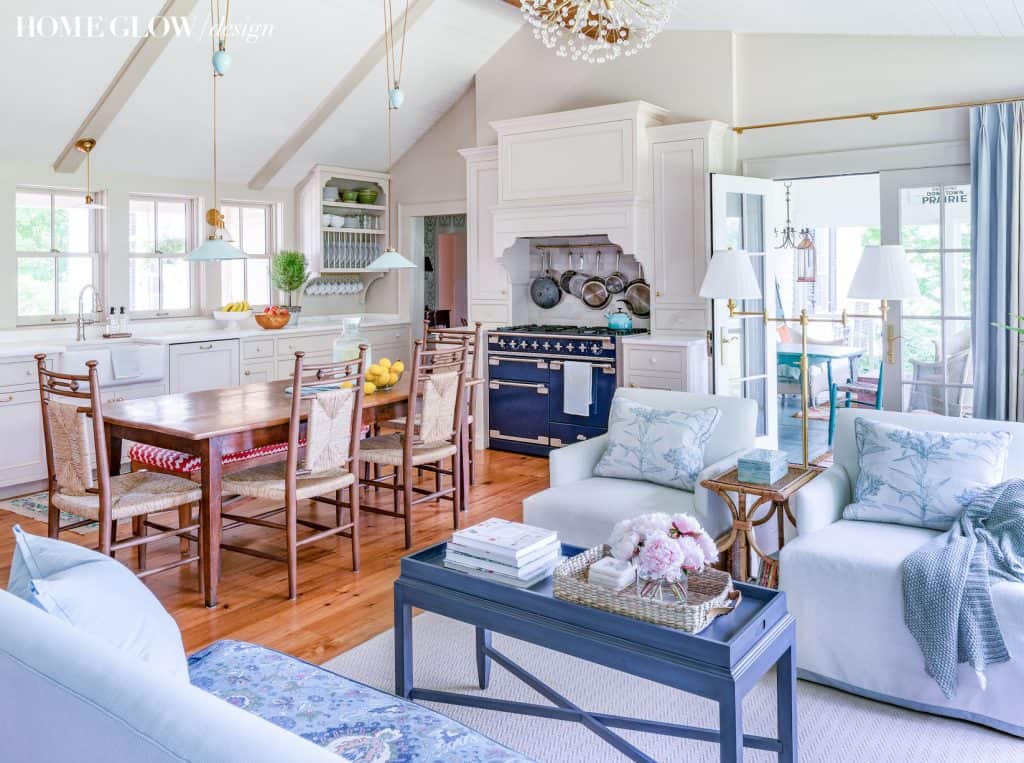 But as costs mounted with the renovation (especially when we had to remove and rebuild half the roof and an entire wall), I had to really consider how much an imported range like the Lacanche meant to me. And also what spending that money meant to limiting our budget elsewhere. So, being realistic, I started looking around.

And I came across the AGA Elise.

I had always known AGA Ranges for their gorgeous $20K cookers from England with their unique temperature regulation systems that minimize fuel consumption, utilizing radiant heat to lock in moisture of every ingredient and thereby preserving integrity of the foods being cooked. Since the ranges are always “on,” they also help heat the home.

While I was intrigued by the AGA cookers, seeing as the Lacanche was probably out of my “range,” the cooker definitely was! But then I saw the Elise!!!

The Elise checked all the boxes for me:

And there was an option in BLUE — and almost exactly the shade of blue I was looking for!

So, yes, while there are far fewer color options, the Elise had JUST the color I needed! 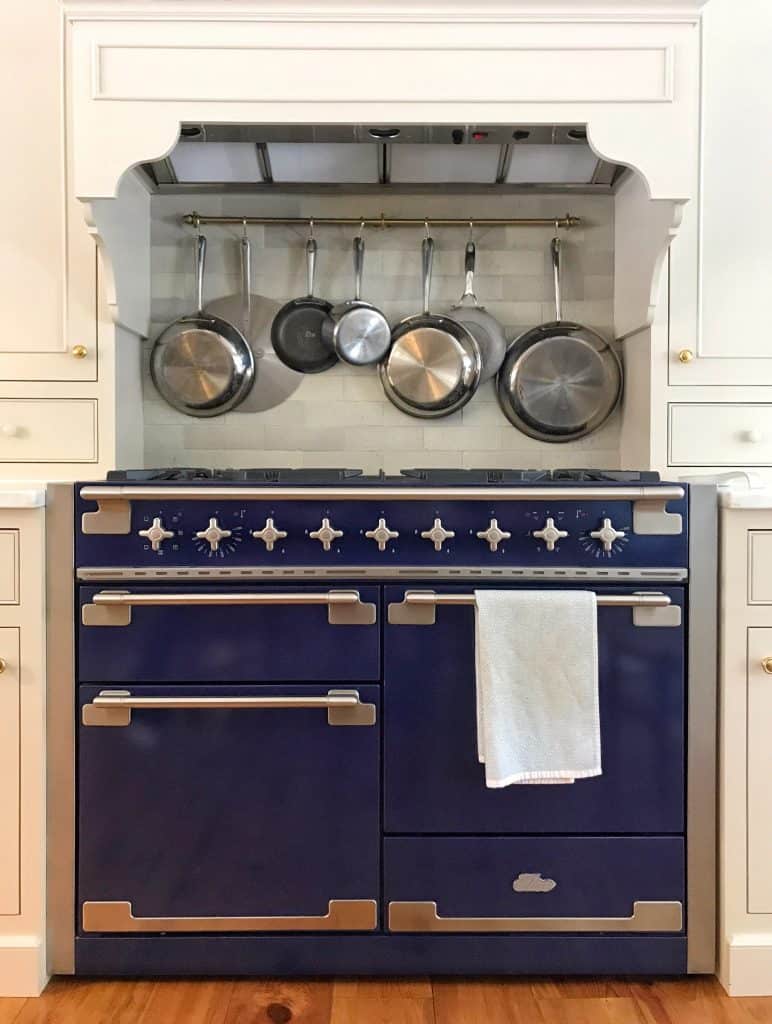 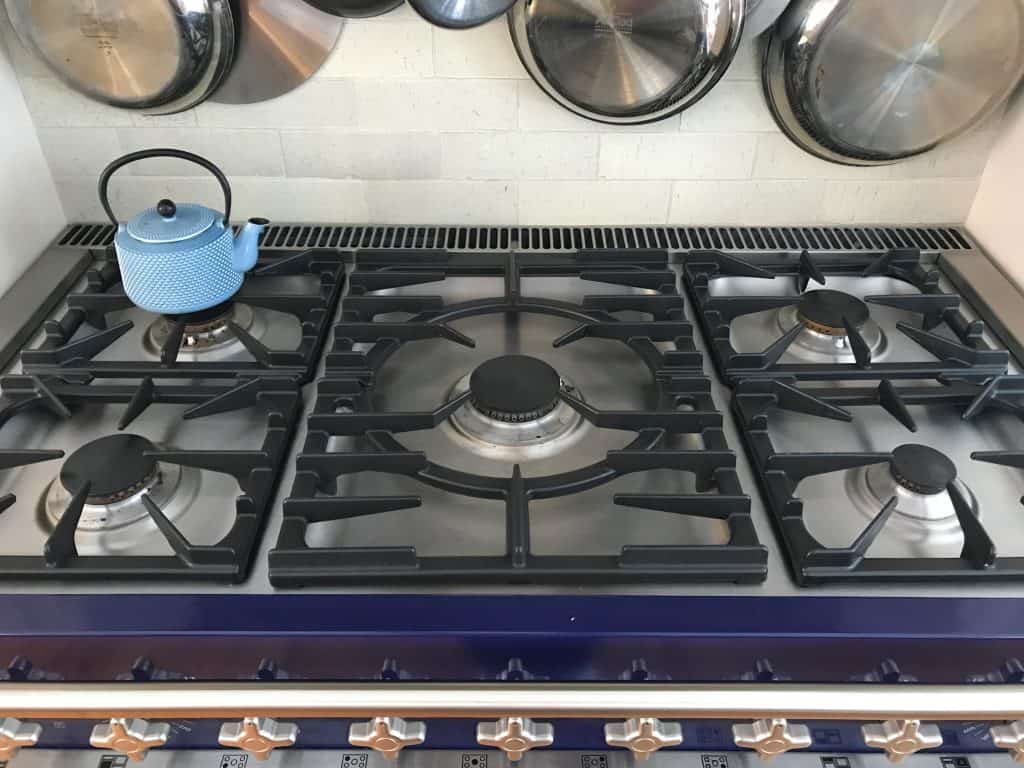 The burners are SUPER heavy. 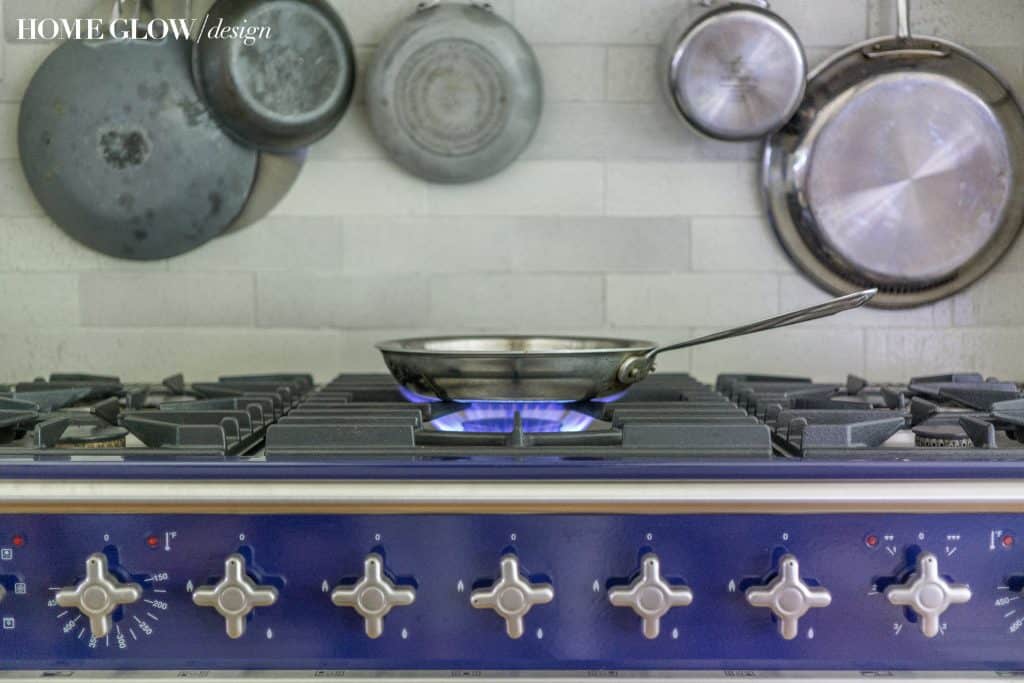 The center 17,000 BTU burner boils water my 8-quart All-Clad pasta pot in about 5 minutes. I find the simmer settings on the 12,000 BTU burners to be perfect for rice. The 6,000 BTU burner is great for those small pots and for items that you just need to keep slightly warm when it’s at the lowest setting. 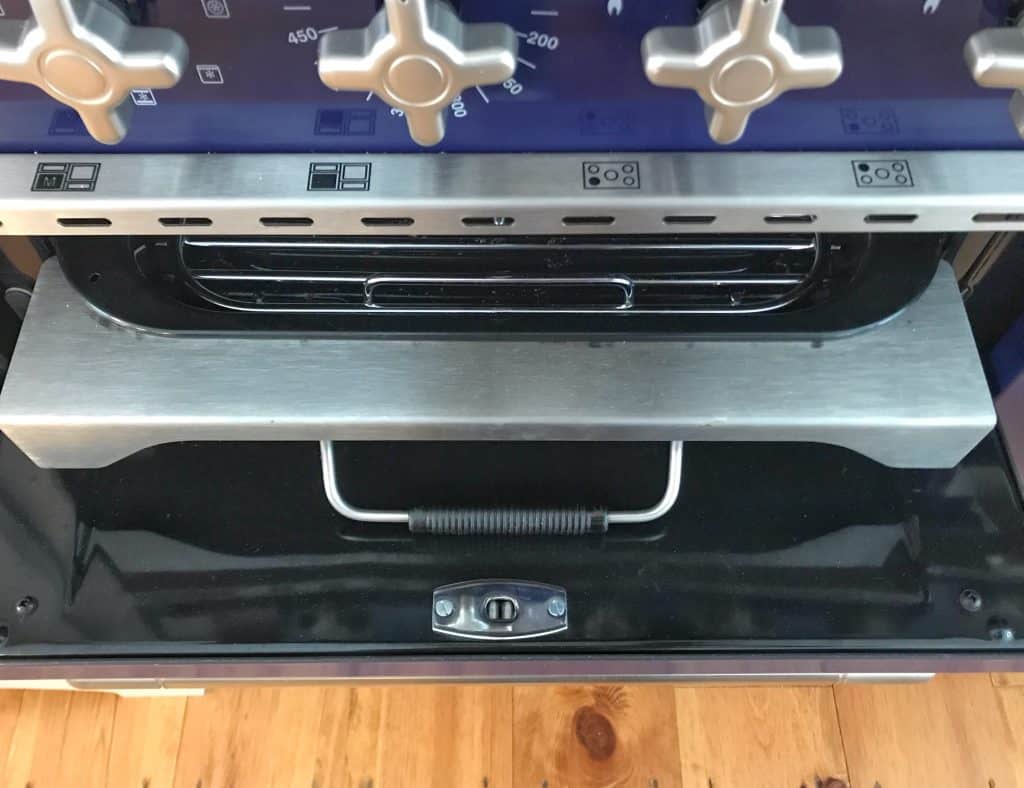 The pull-out broiler tray. The rack has 4 height settings. I haven’t used it for meat, because the Handsome Husband is a grill snob, even when it’s 10 degrees outside. But I love it for toasting croissants and browning tuna melts.

Can you tell I like comfort foods on winter weekends? 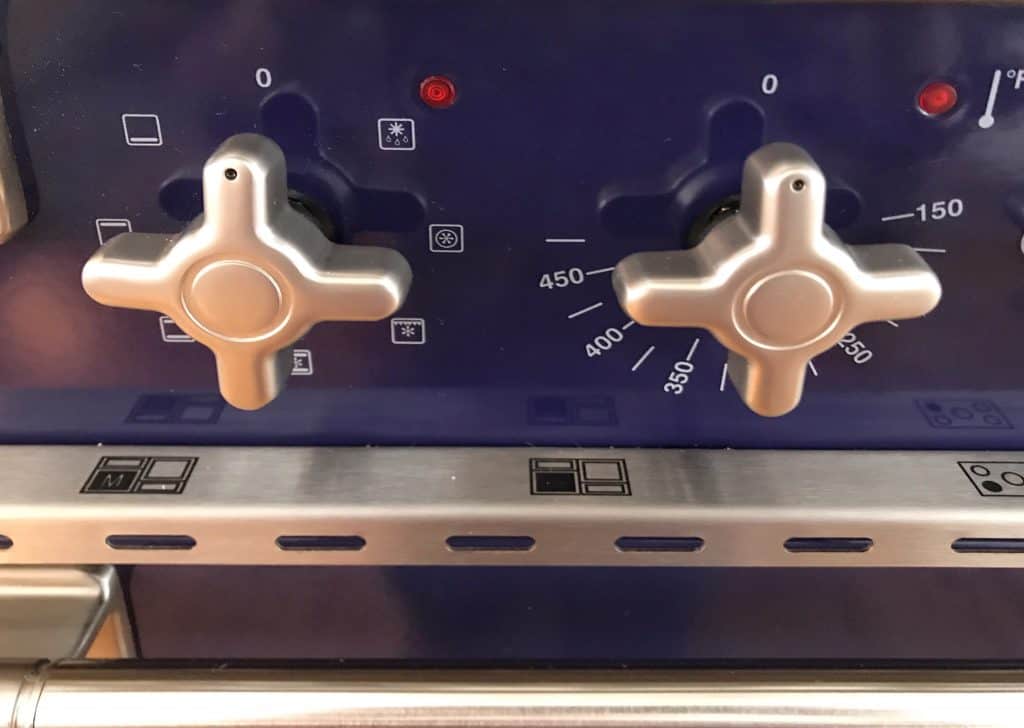 Controls for the 7-function oven — both where you want the heat to come from on the left & temperature on the right. 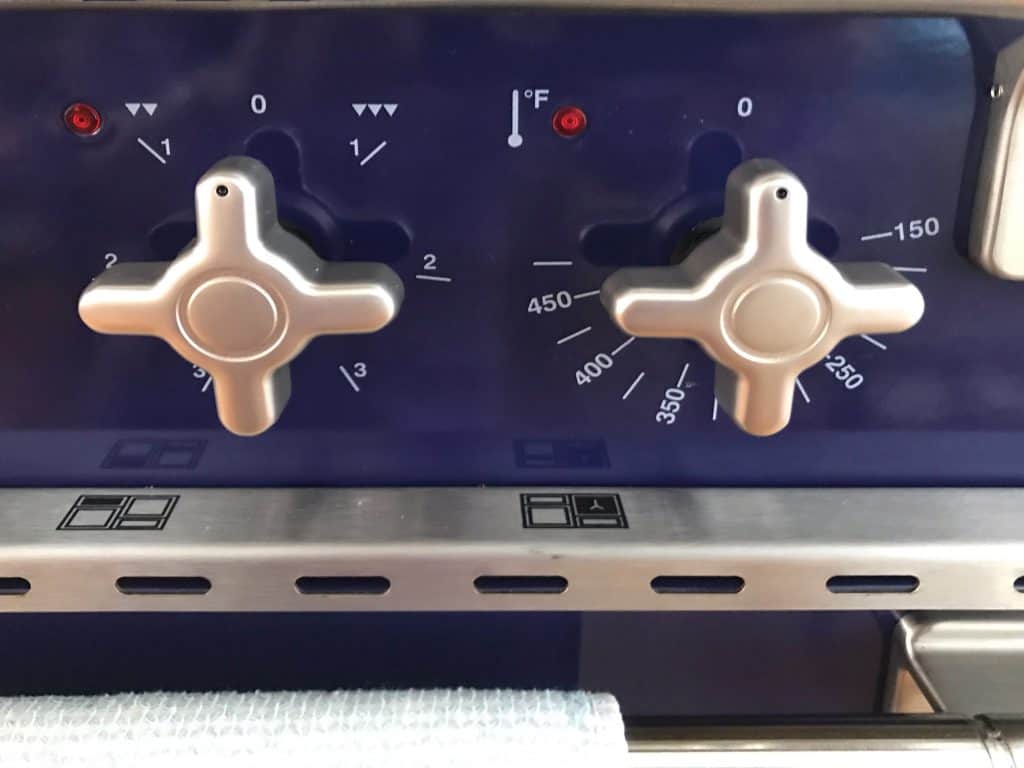 Controls for the broiler — half or full with power at 1-3, and temperature for the convection oven.

I always thought that you were supposed to put convection ovens on temperatures 25 degrees less than conventional ovens. But then I was reading a British cookbook I had, and it said to put it 50 degrees lower. Worked like a charm.

I thought I would write this post back at Easter time, when I was concurrently making brunch for the morning and a white cake for the afternoon — just to show you how much you can do at once! But at the time I felt nothing turned out pretty enough for pics. And I left the stove a mess!

BTW — this is one of the many benefits of having a separate, formal dining area. You don’t have to see the mess while you eat, OR you don’t have to clean up and let your food get cold!

Anywho! Here, I’m swallowing my pride and showing you REALITY! 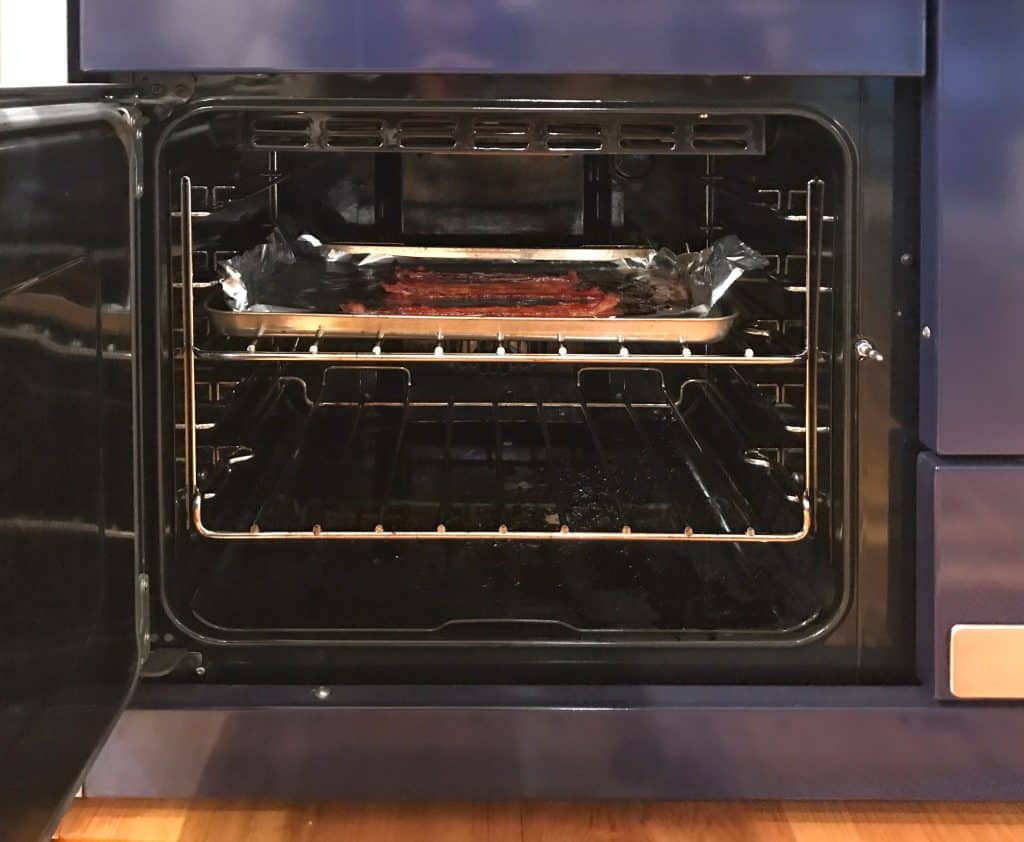 Bacon in the conventional oven. 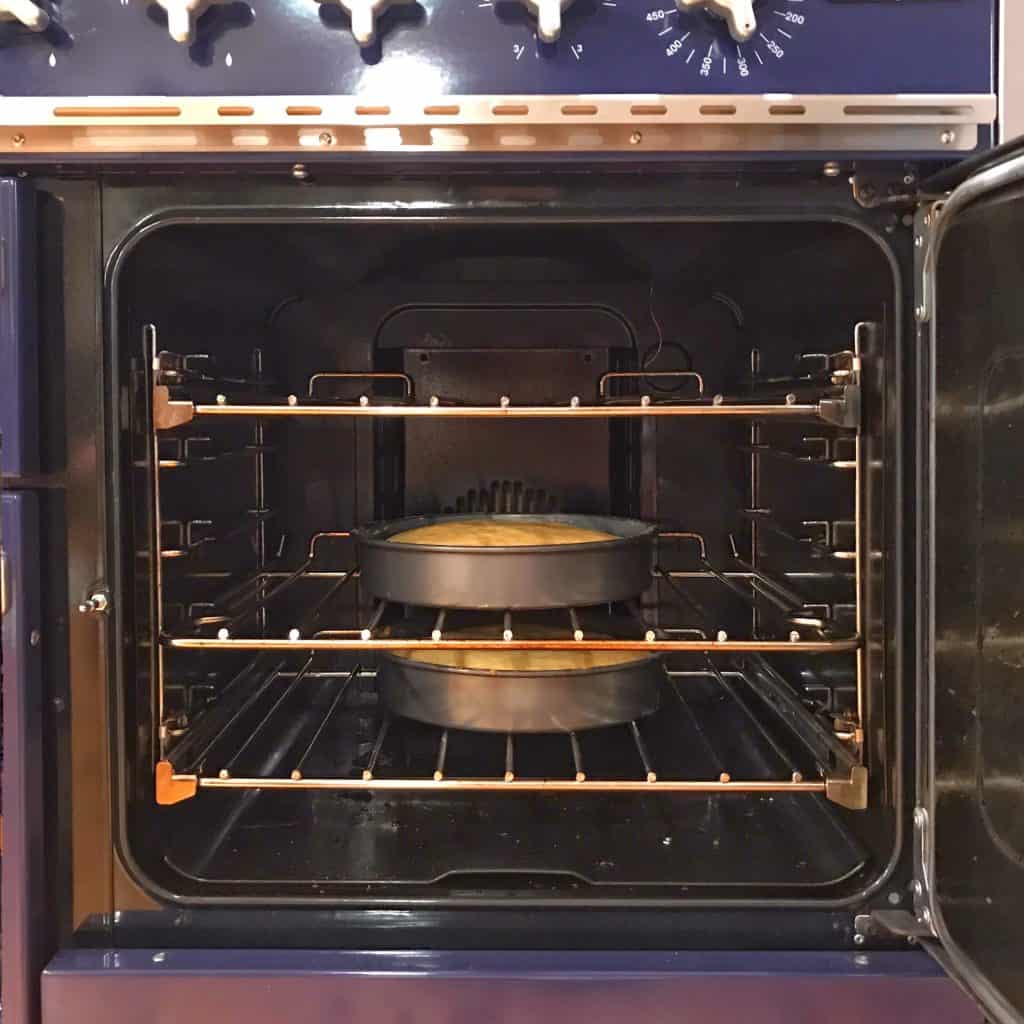 Cake layers in the convection oven. I can even do 2 racks of popovers and they don’t deflate! 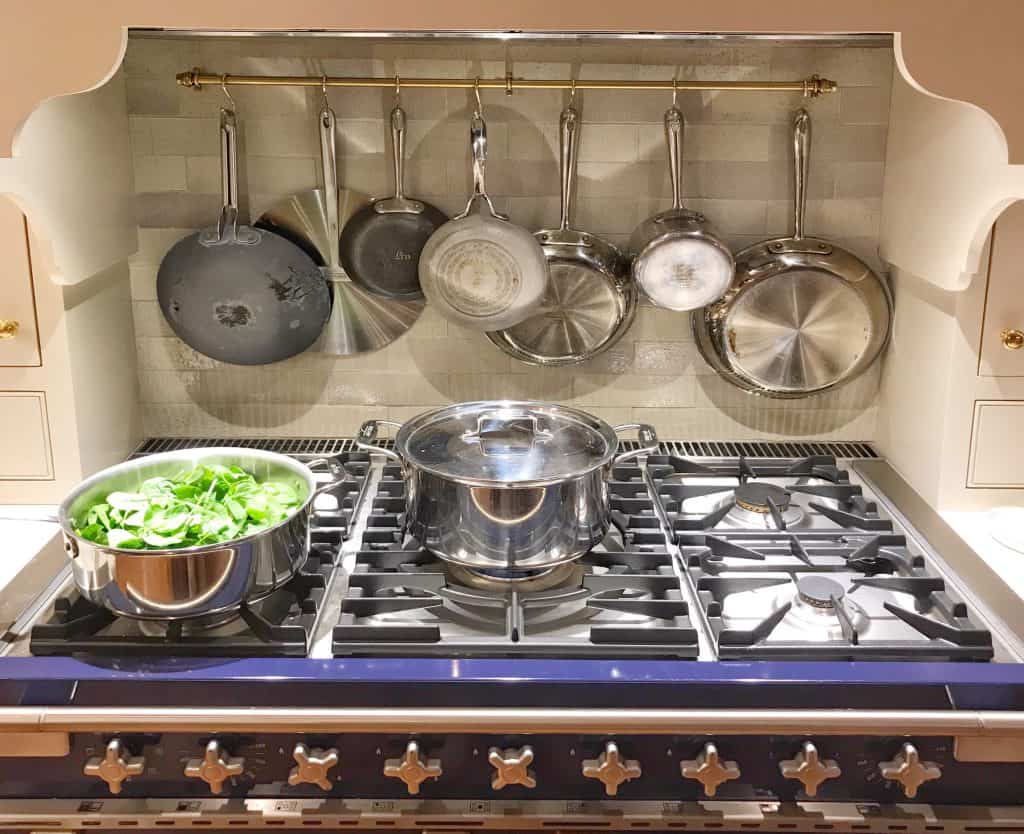 Simmering water for poached eggs and wilting spinach for the creamed spinach to go on top!

The questions all Americans ask have to do with SIZE. We are used to big skies, big houses, big cars, just BIG. We’re used to our 36″ ovens.

But I think about how in ONE SOLID YEAR there is nothing that I’ve cooked that hasn’t fit in these ovens — cakes, turkey, Beef Wellington, multiple cookie sheets, Dutch ovens. You name it — it’s fit. And I’m saving energy by heating up a smaller space.

Did I need new cookie sheets and pizza pans? Yes.

Did I need to buy a timer (the range doesn’t have one). Yes.

But I like my new 3-setting-timer more than just having one on the stove!

Above are the inexpensive items I ordered, and they’ve been awesome. No complaints.

Do I ever wonder about the Lacanche? Occasionally. Living in a pretty rural area like I do, I’ve never actually seen one in action or cooked on one, so I can’t compare except in aesthetics, size, and price. But I can honestly say that the AGA Elise does everything I hoped it would do and more, without glitches for a year (fingers crossed!). I’m more than satisfied.

A graphic for you to pin and remember me by! (Or for when you want to convince your S.O. to buy a new Elise for your kitchen reno. 😉 ) 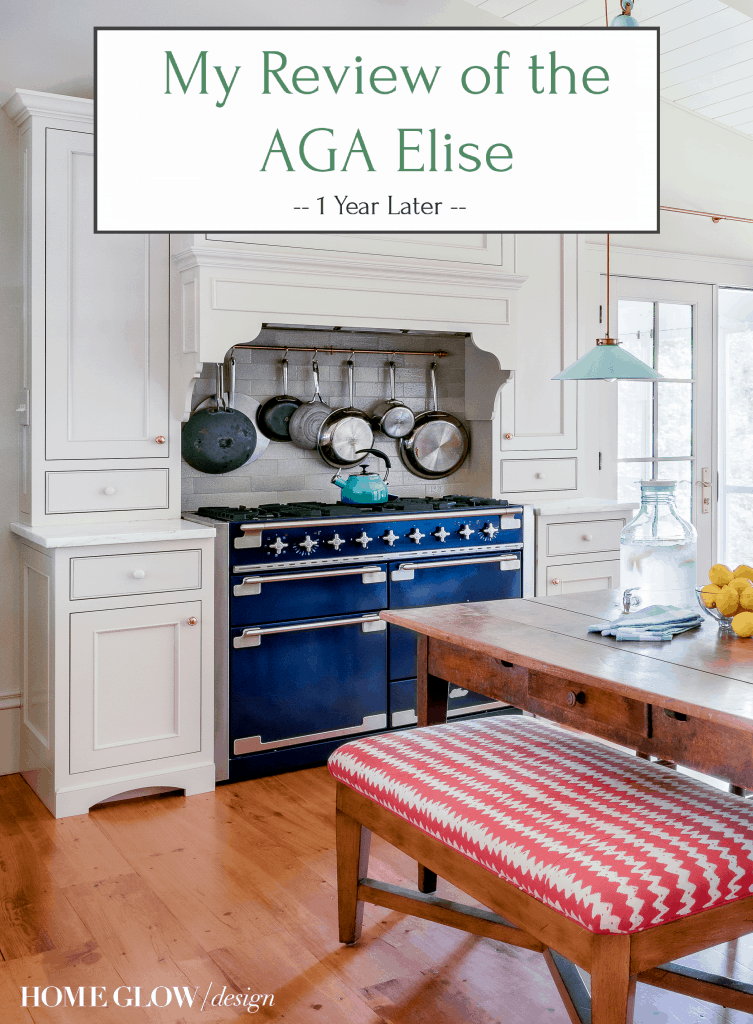 I have a new little thing in development for you, dear readers, so stay tuned in the coming weeks!

See you next Saturday.

PS — I’ll be  opening enrollment again for my 8-week online course “The Home Glow Method, my Step-by-Step System to Decorating Your Forever Home For Keeps” again in just a couple of months.

Head to the info page for an overview and a few testimonials from the Fall 2020 Class of The Home Glow Method. Be sure to get on the waitlist so that you don’t miss the short enrollment period! 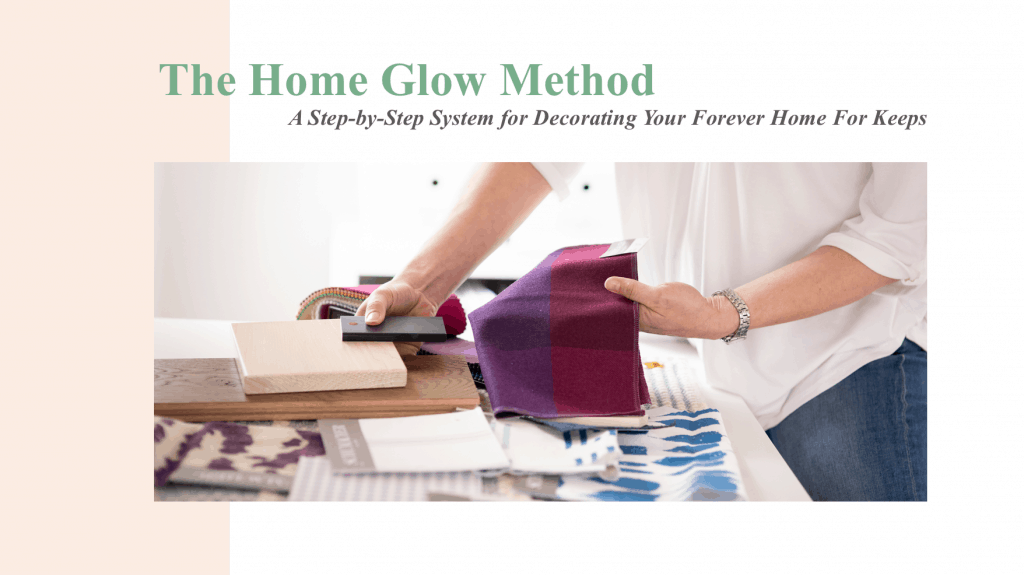