A couple of weeks ago, the Handsome Husband and I were able to get away for a brief sojourn in a city we’d long been wanting to visit: Chicago. It held a couple of attractions for us, beyond the usual tourist destinations — namely, cocktails & architecture.

Yes, we’d both seen the inside of O’Hare and Midway a number of times, but that doesn’t count, does it?!

As you can imagine, when we get away, the decor and atmosphere of hotel itself matter quite a lot to me. After reading a lot of reviews and balancing vibe and price, we decided to stay at the Thompson Hotel, Chicago.

I recommend it very highly!

The bar was a great place to stop and refresh after each long day of walking, with a mixed crowd in their 30s-60s that was casually hip and welcoming. I didn’t feel too country-bumpkin or middle-aged. 🙂

Our room was much like the one above. Hip, but comfortable.

Our first stop, after a nap (honestly, a nap is almost as exciting a visiting a new city), was the Violet Hour, a speakeasy we’d known about for at least a decade because it was the mother-ship of our favorite speakeasy from our 5 years in Nashville,  the Patterson House.

Even though we knew where it was, we actually walked by the entrance 3 times and had to ask directions at the pizza place around the corner. 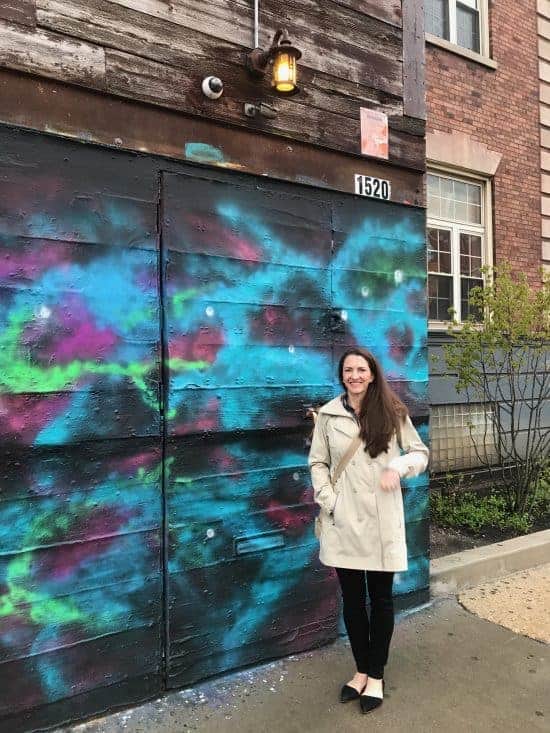 Eureka! We found it. Look for the overhead light, because I think the mural changes.

Now, behind the curtain! 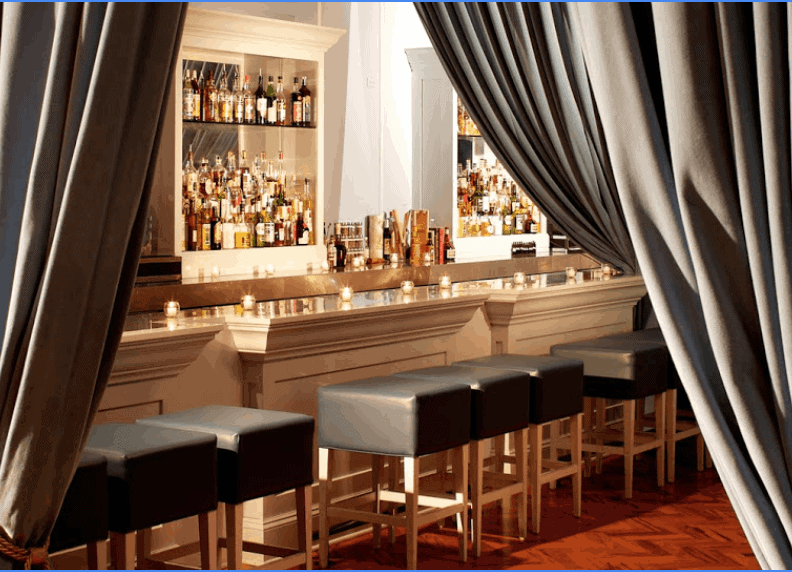 We got there in time for the L’heure Verte (the Green Hour), which is the Violet Hour’s absinthe happy hour, complete with traditional absinthe drip. 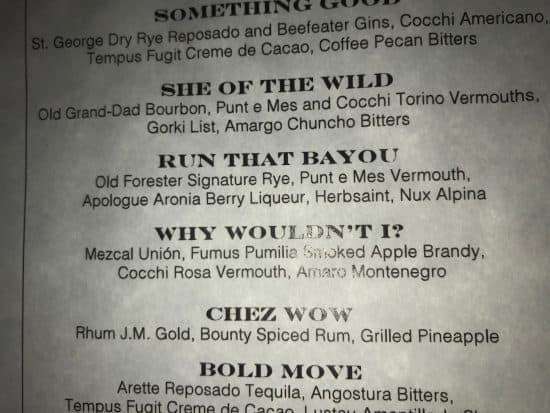 The next day was an architecture day for me! (The HH went to a work conference.) I’d heard that the tours conducted by the Frank Lloyd Wright Trust were wonderful. The only hard part was choosing which one to go on!

I decided upon the Robie House, because it had just reopened after an $11 million restoration to bring it back to its original state. 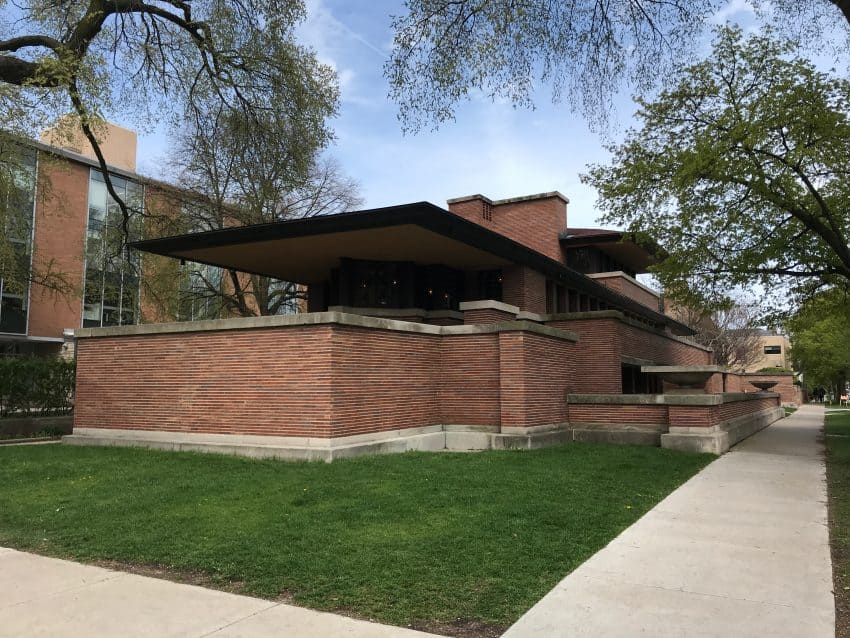 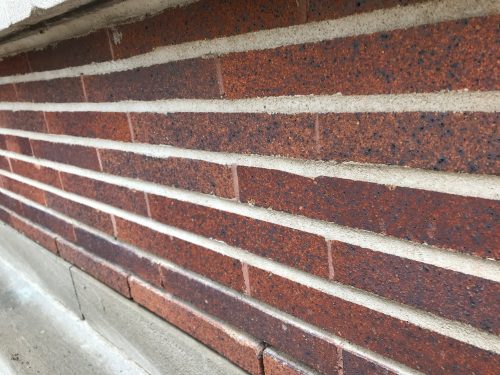 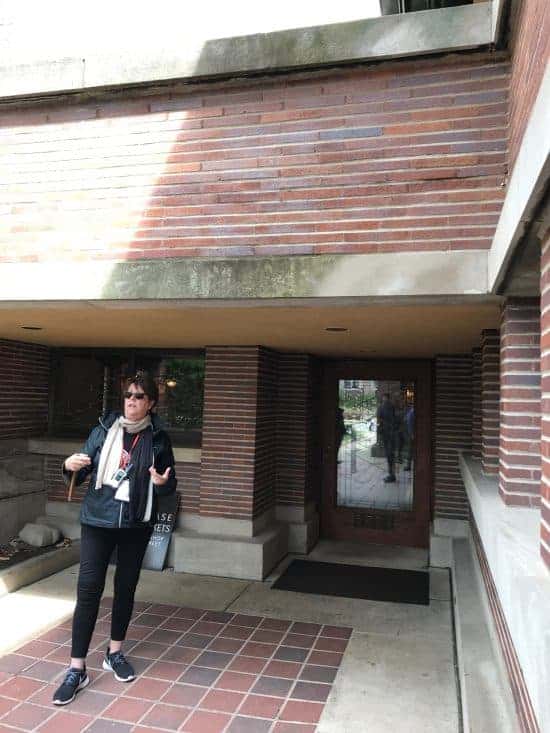 I’m sorry my pics are a little rough. We had to keep moving  — no dawdling or lingering! So many of these are “action shots.” This is my tour guide, ushering us through the front door … well … primary entrance, I should say. It felt a little like going into a cave and definitely was not in the front of the house!

Hiding the main entrance underneath an overhanging balcony and placing it to the side was done to create a sense of privacy for the family.

In fact, the house feels walled in — protecting the family from intrusion while allowing the inhabitants to see out. Frederick Robie was apparently a little paranoid about the safety of his 2 children.

Wright sought to create a sense of anticipation, ushering people through the entrance hall and up to the main entertaining room.

Honestly, one feels a bit squished. A sense of being sat upon by the ceiling definitely made me want to be ushered up those stairs! 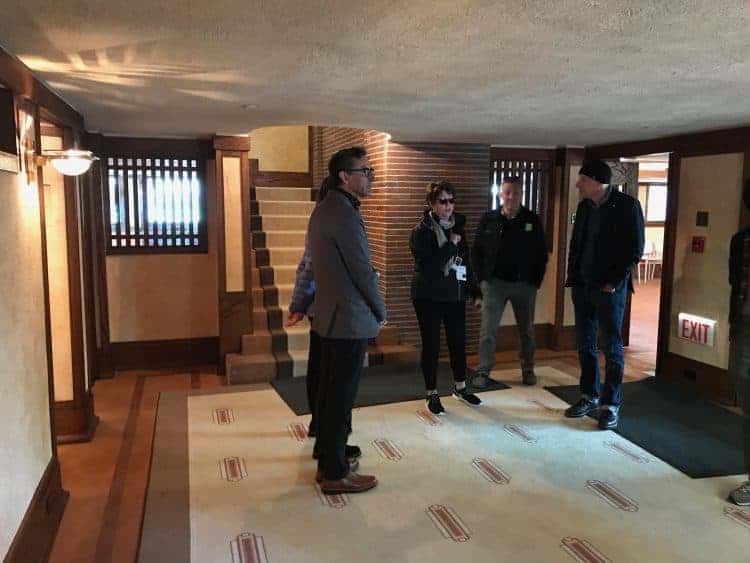 None in the group was very tall, so you can get a sense of the lack of height. Not many Americans I know of, with our devotion to high ceilings and space, would be creating this look in the new-build homes of their dreams nowadays! 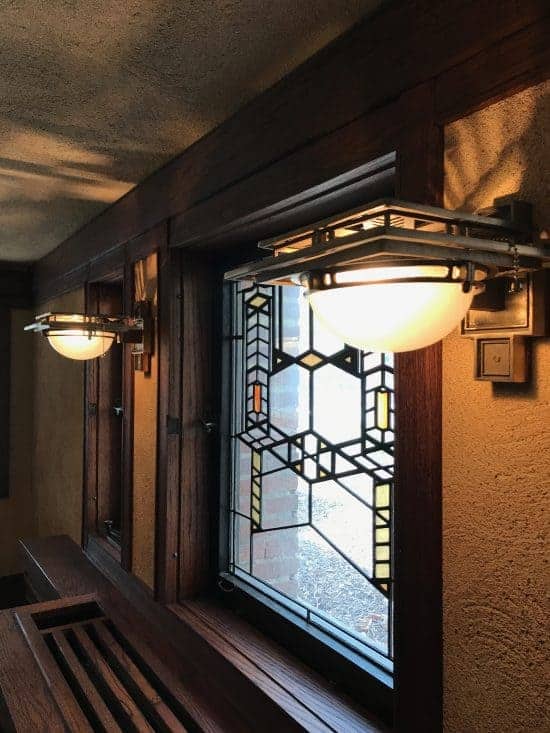 All the sconces in the house were painstakingly reproduced from a single one that remained in the house prior to the restoration. 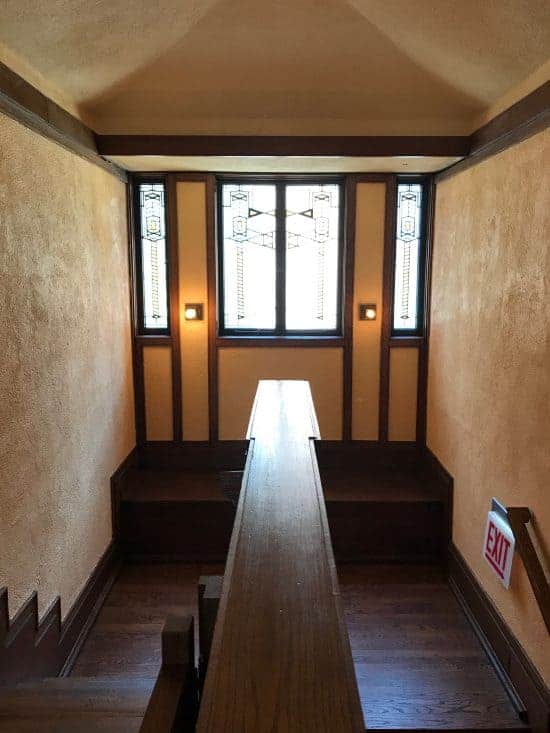 Up the stairs, yearning for light! 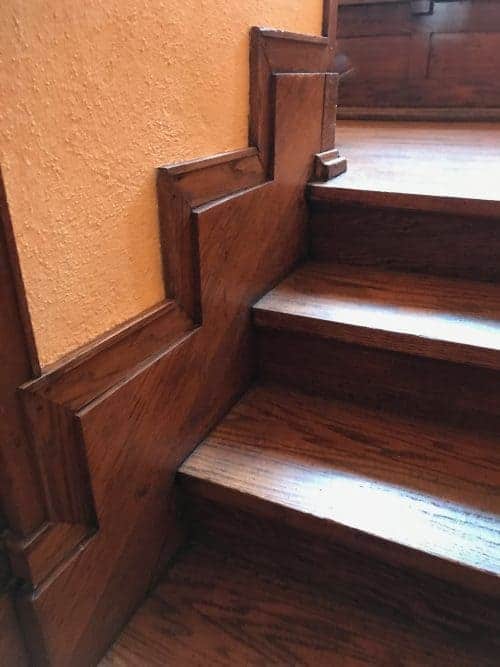 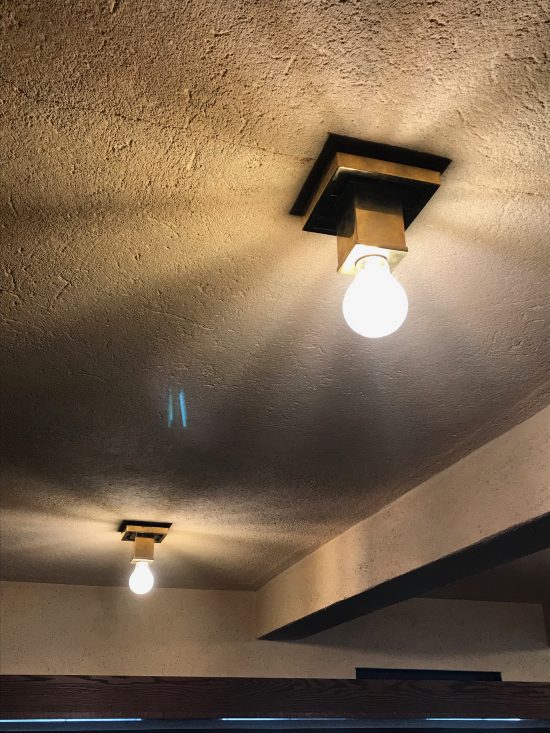 More original and reproduced lights. The bare bulbs were a status symbol — showing off that the Robies had electricity rather than gas lighting. 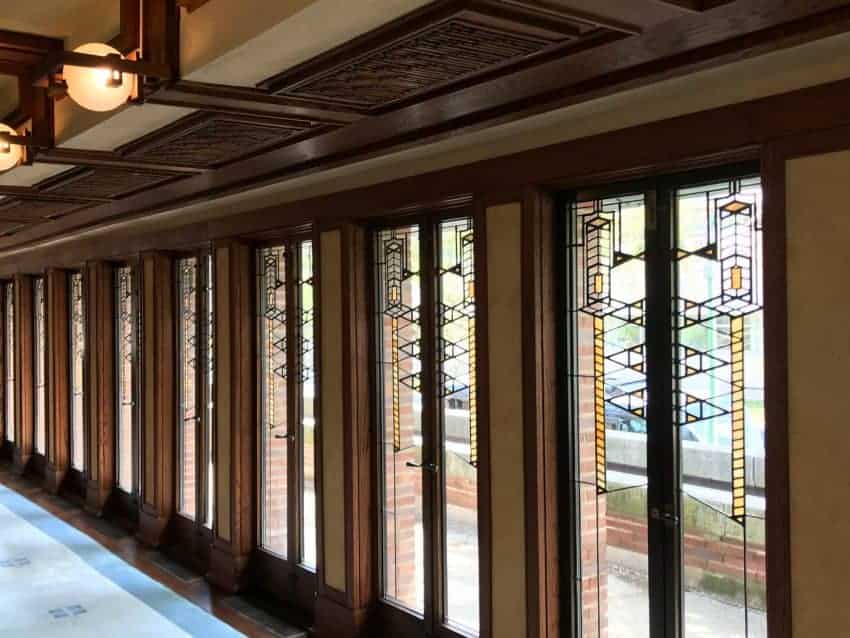 Worth the wait! The main entertaining rooms are AWASH in light. It truly feels like you have come out onto the deck of a ship and into the sunlight, with a view of the world! 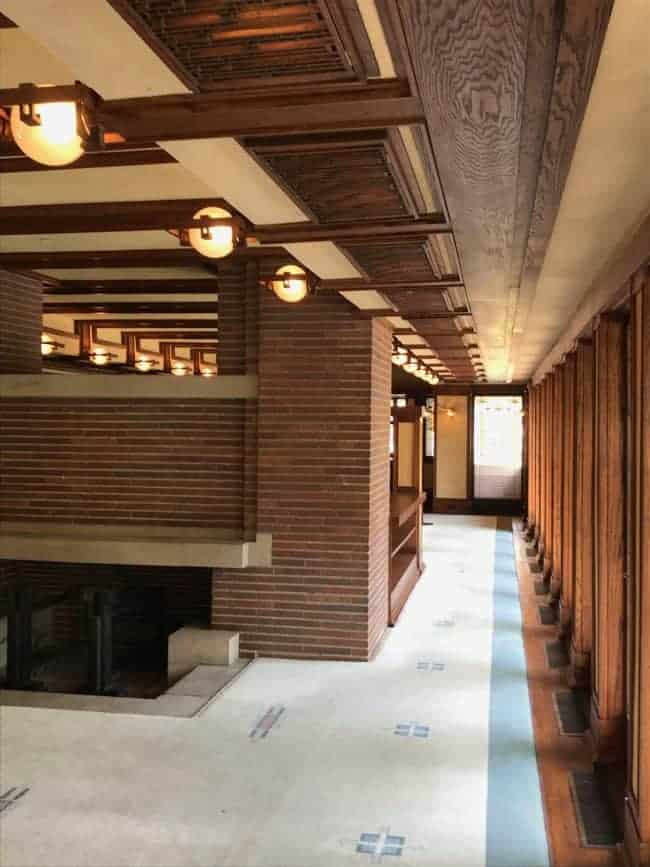 The monolithic fireplace divides the parlor and the dining room, funneling guests from one space to another along the corridor of windows. 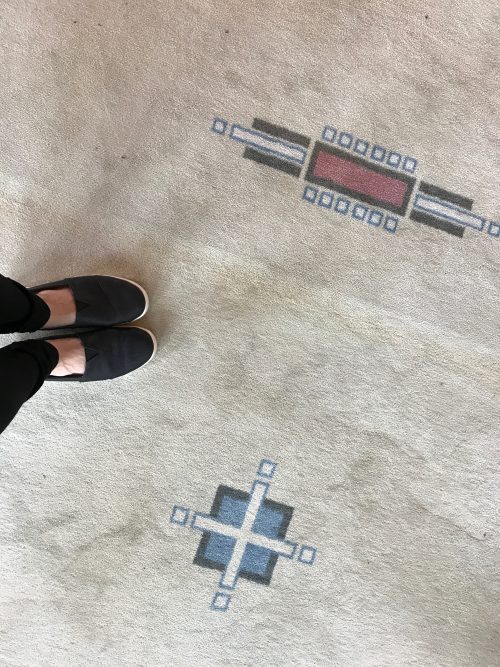 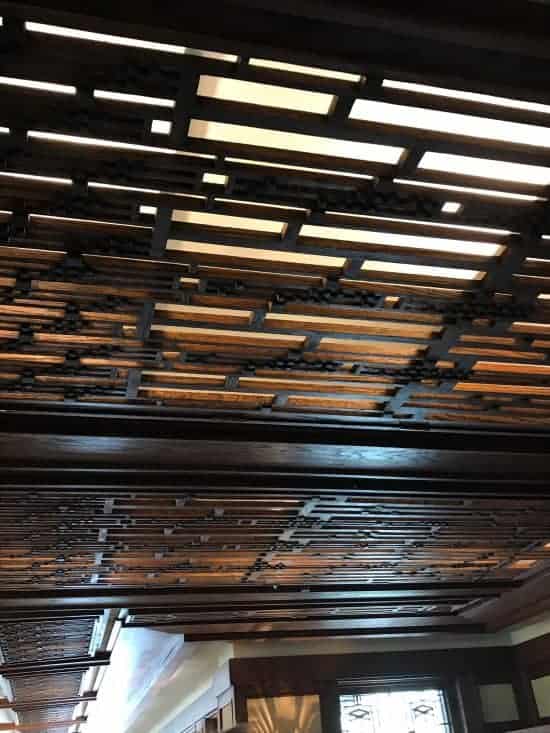 Wood grills cover the overhead lights, making the inhabitant feel as though she is walking under rustling leaves filtering the light from the sun or moon. 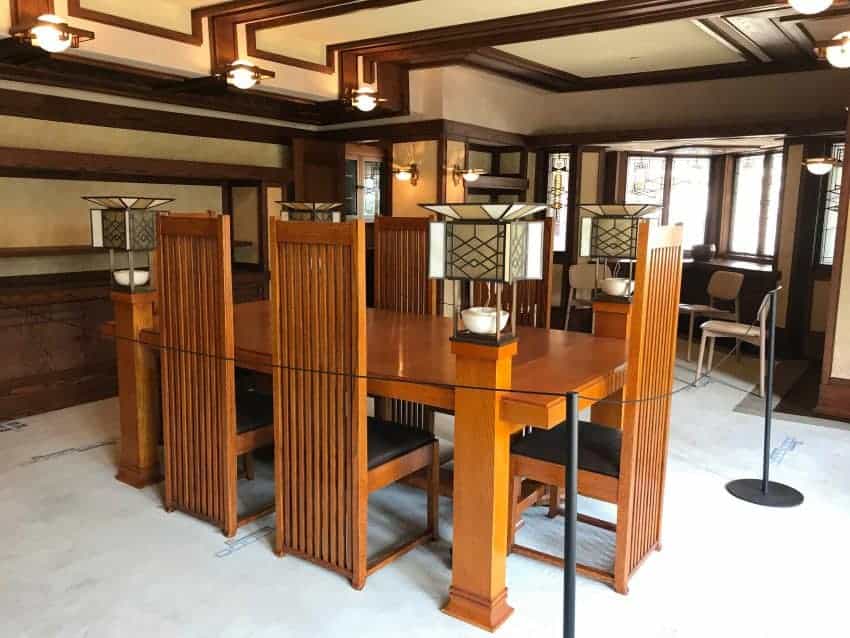 “I have been black and blue in some spot, somewhere, almost all my life from too intimate contact with my own furniture.” — Frank Lloyd Wright

Talk about suffering for the sake of beauty!

The amazing dining room. Form conquers comfort. Wright didn’t care a fig for how at ease people were in his houses. This table wasn’t meant for lounging; it was meant to focus its diners on the conversation at hand and block out any potential distraction. 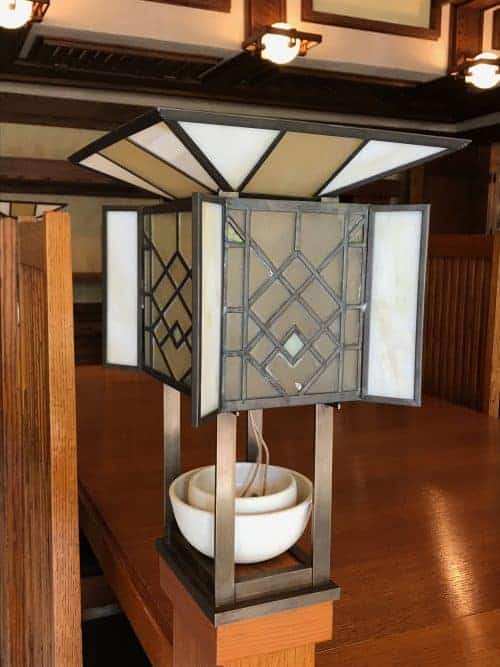 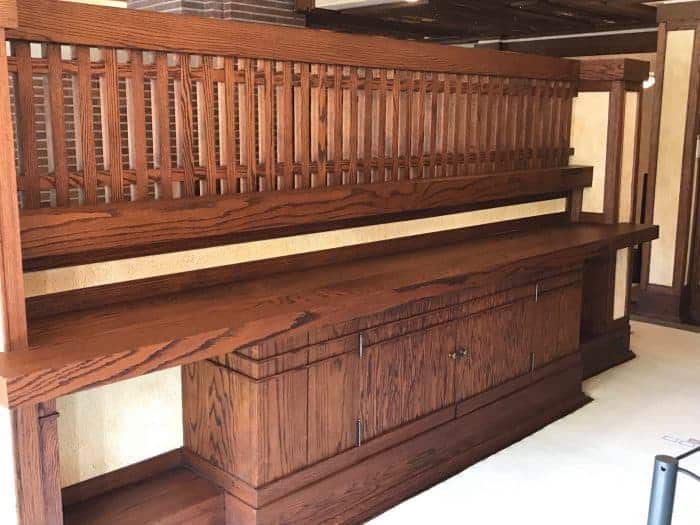 An example of the built-in furniture, another Wright trademark. 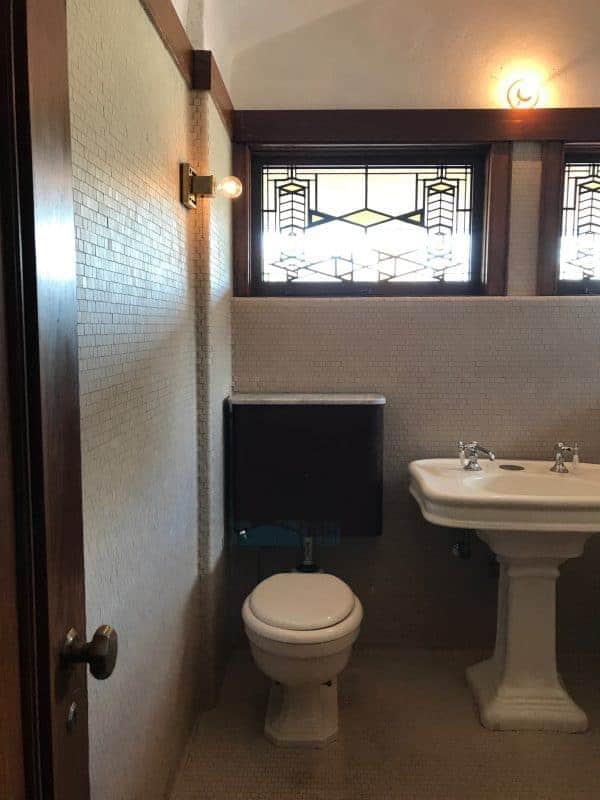 My favorite — the bathrooms, all of which roughly look like the above. I love the tumbled, honed, mini-marble tiles taken from the floors up the walls, paired with the rich wood. Now, this is a room that I wouldn’t mind having in my own house!

Wright was brilliant. An artist. A visionary. Of that there is no doubt. But could I live in the Robie House forever? I don’t think so.

Neither were Frederick Robie and his family able to. Sadly, the marriage fell apart, as did Robie’s finances, and they sold it and all its contents after only 14 months. Another family lived in it for 12 years, and then it passed into dormitory life, was nearly torn down … oh, lots of sad stuff, until it was rescued.

But I DO admire the Robie House very much, and I’m very glad it was saved!

Again, I’d heard so many wonderful things about the Chicago River Boat Architecture Tours. We booked this way in advance, not knowing how popular it might be. Unfortunately, it was friggin’ freezing, and we were both under-dressed for the 38 degree and rainy weather.

We toughed it out though! 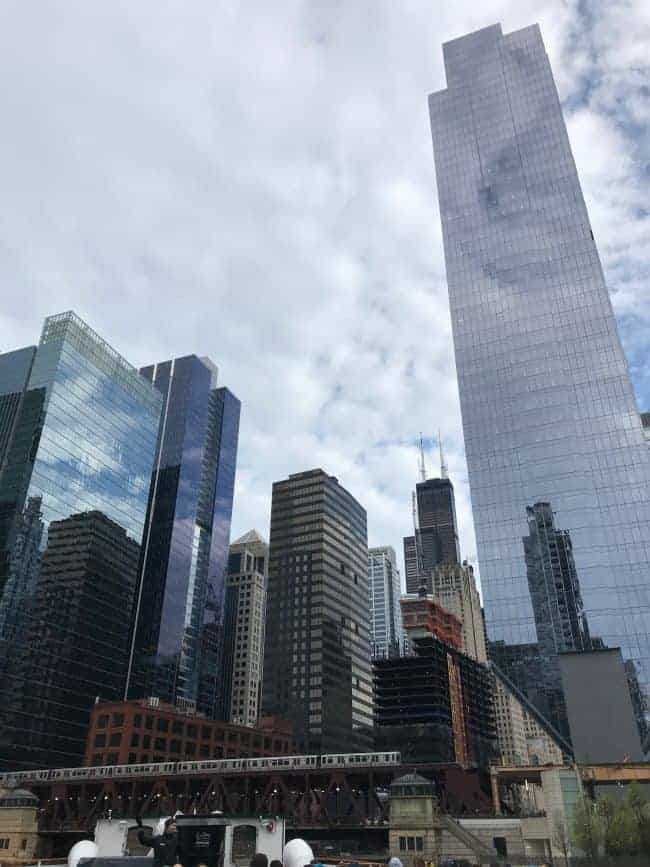 I love this picture, because you have the L (train) and the Sears (Willis) Tower in the same shot.

Our docent is there in the bottom left. She was fabulous. Her passion for Chicago architecture was inspiring — or else we couldn’t have stayed on deck for 2 hours! 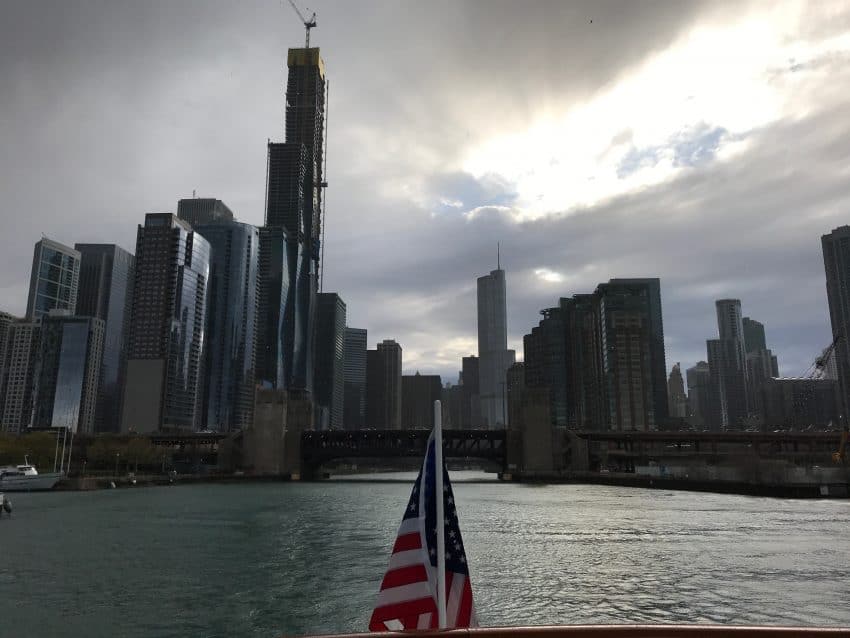 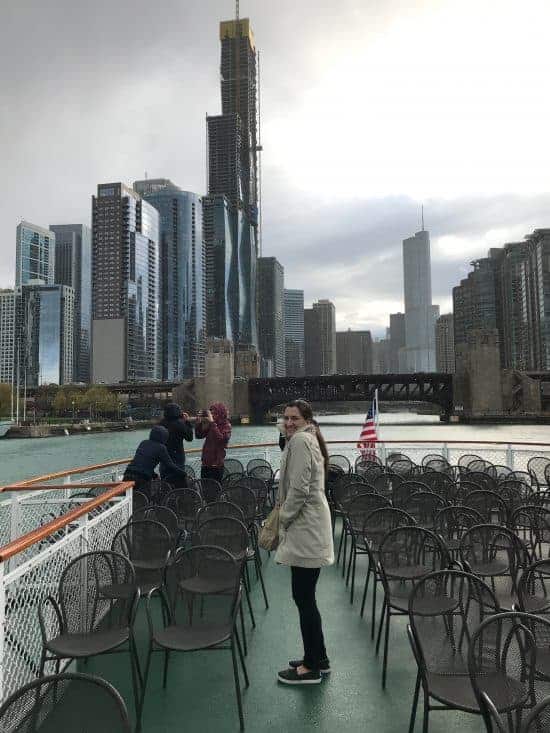 I think I was convulsively shivering at this point.

Millenium Park and the Art Institute of Chicago

Of course, the sun came out the next morning, and the tulips were in their glory. 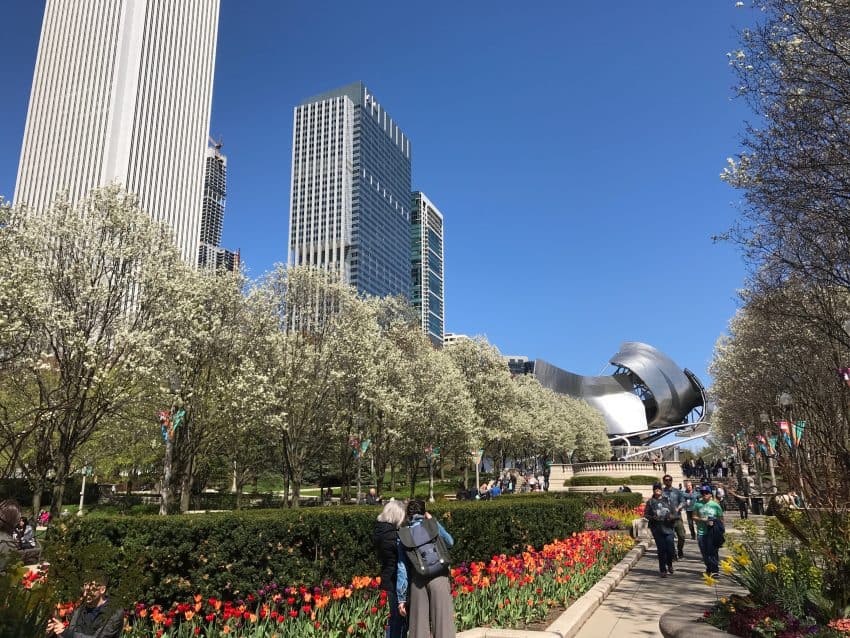 I walked through Millenium Park, which is truly very cool.  The Jay Pritzker Pavilion (above) is glorious in the sun light, and Maggie Daley Play Garden is the most wicked playground you ever did see, with a skating ribbon, a climbing wall, and mini golf.

I almost wished Things 1 & 2 were with me! They would have loved it. 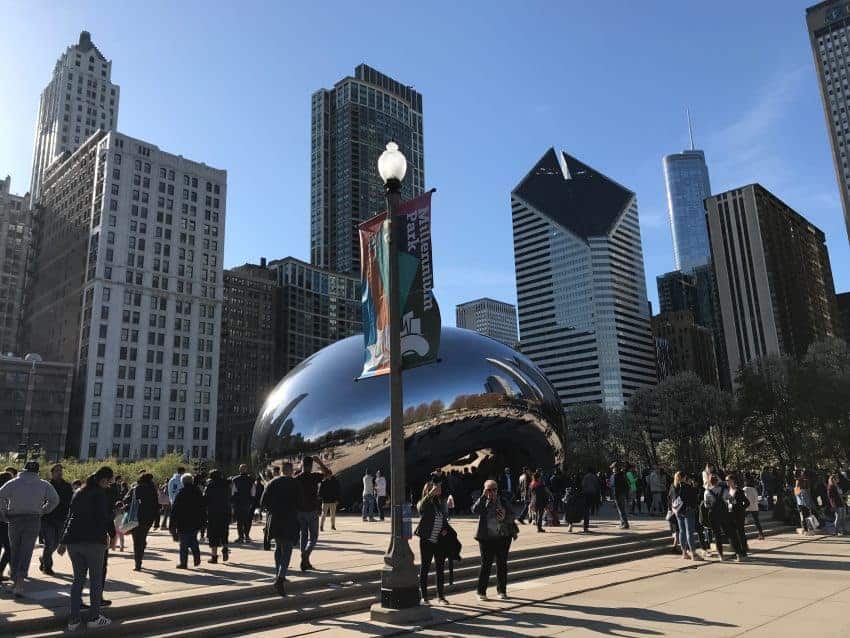 Then there was this weird silver jelly bean thing….

But I kept walking to my destination, the Art Institute of Chicago. 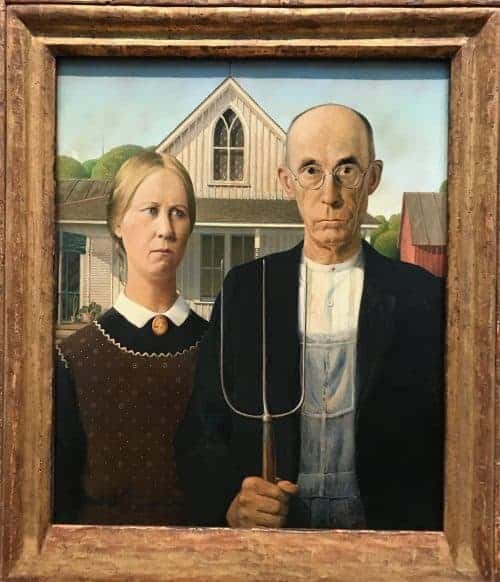 American Gothic, by Grant Wood. Art and architecture combine yet again in the Heartland.

I’m sure you don’t want to see my pictures of paintings, but the Institute is absolutely wonderful! I hadn’t been to an art museum in years, and this one was stellar.

The Impressionist wing was absolutely amazing. I spent the majority of my time there (I only had 2 hours!). The Museum has a “highlights” self-guided tour, which allows you to make sure that you see all the biggies. So that, combined with the Impressionists, and a bit of the Modern Wing, is what I did.

I met the Handsome Husband on my walk back to the hotel.

And that was our trip!

Have any of you ever been to the Violet Hour? Did I miss anything I should have done so that I can do it next time? Favorite restaurants or haunts?

I’ll be back next week with an exciting project preview for a national magazine! Can’t wait to give you the scoop.